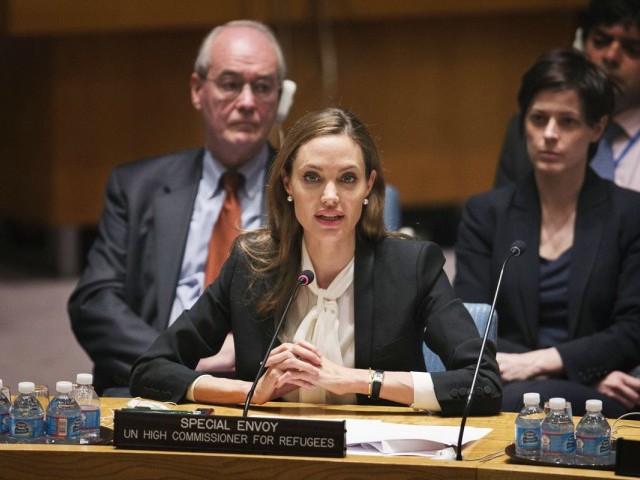 UNITED NATIONS: Actress Angelina Jolie urged the UN Security Council on Monday to make dealing with war zone rape a top priority as she shared stories of survivors she has met, including a Congolese mother whose 5-year-old daughter was raped outside a police station.

Oscar-winner Jolie, a special envoy for the UN Refugee Agency, told the council that it must shoulder its responsibility and provide leadership “for these crimes happen not because they are inherent to war, but because the global climate allows it.”

“Young girls raped and impregnated before their bodies are able to carry a child, causing fistula,” she told the debate on sexual violence in conflict which was organised by Britain, the president of the council for June.

“Boys held at gunpoint and forced to sexually assault their mothers and sisters. Women raped with bottles, wood branches and knives to cause as much damage as possible. Toddlers and even babies dragged from their homes, and violated,” she said.

Jolie, who has visited refugee camps around the world, said that while there were hundreds of thousands of survivors of sexual violence there had only been a handful of prosecutions because the world had not made the issue a priority.

“They suffer the most at the hands of their rapists, but they are also victims of this culture of impunity. That is the sad, upsetting and indeed shameful reality,” Jolie said.

Jolie visited a refugee camp last week in Jordan and told the council about meeting a Syrian woman who feared retaliation if she spoke out about the sexual violence she had suffered.

After Jolie spoke – along with UN Secretary-General Ban Ki-moon and Ban’s special envoy on sexual violence in conflict, Zainab Bangura, – the 15-member Security Council unanimously adopted a resolution recognising that rape can exacerbate conflicts and impeded the restoration of peace and security.

The resolution “encourages members states to include the full range of crimes of sexual violence in national penal legislation to enable prosecution for such acts.”

British Foreign Minister William Hague said that in conflicts around the world “rape is used systematically and ruthlessly, in the almost certain knowledge that there will be no consequences for the perpetrators.”

“While the perpetrators have enjoyed the fruits of peace and have been free to rebuild their lives, their victims continue to walk in shadow and shame, unable to lay the past to rest and to move forward.”

Ban said the Security Council resolution sent a strong signal to perpetrators that their acts will no longer be tolerated and they will be held accountable.

He spoke about visiting a hospital in Goma in the Democratic Republic of Congo last month where he met women and girls raped and maimed by armed groups on all sides of the conflict.

“Many had a condition called traumatic fistula. In plain terms, they had been torn inside,” Ban told the council. “Experiencing great pain and often unable to control bladder and bowels, they are disabled and often shunned by society.”

Ban said the Congolese women were angry and had a clear message – “No more impunity. No more war. Give us peace.”

US hopeful of getting Taliban peace talks ‘back on track’