People hold their breath for the completion of four flyovers

People hold their breath for the completion of four flyovers 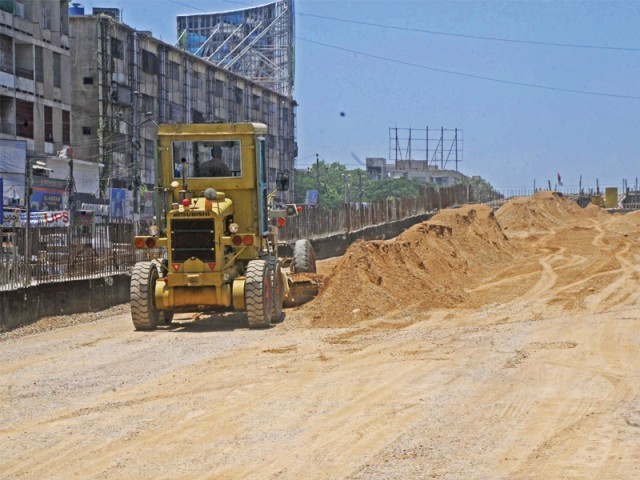 The under-construction flyover at Ayesha Manzil is causing a lot of health problems, according the residents and business owners of the vicinity. PHOTO: MOHAMMAD SAQIB/EXPRESS

People who live and work near Shahrahe Pakistan, where flyovers have been under construction for the past six months, claim health problems are literally being forced down their throats.

In May last year, Karachi Metropolitan Corporation (KMC) awarded contracts for the construction of four flyovers at the Ayesha Manzil, Teen Hatti, Water Pump and Dhakkana intersections. But the projects hit snags along the way and the construction began at the very end of last year. The administrator himself paid the construction sites a few visits, repeatedly setting new dates for the project’s completion.

Now people living and working near the site are saying the protracted construction has led to a range of breathing problems as a cloud of dust permeates the air. Hameedullah, who sells sunglasses on the footpath next to the construction site, said he’d been dealing with a raspy voice and laboured breathing for quite a while. “The doctors told me to pack up and leave this place. But I’m finding it difficult to set up my stall somewhere else.”

Allah Dino, a policeman posted at Water Pump, had similar problems to share. But he quickly brushed them off. “I’m not seeking medical help right now. It’s just an allergy…it will settle down on its own.”

Abdul Hameed, a security guard at a private bank near the construction site, was miffed that he had to deal with breathing problems and didn’t hold back. He pinned this problem solely on the dust emanating from the construction of the flyovers. “I’ve got so many issues to deal with and now I have to seek treatment for shortness of breath as well. I get minimum wage with no health allowances. This isn’t enough…the government should look into the matter.”

The haze that has been enveloping the area has become an irritant for other reasons as well. Shakir, who owns a car accessories shop, wasn’t bothered about dust tickling his throat. “Health comes later. I can’t run my business with dust coming in all the time! Half the accessories are sensitive to dust.”  While talking to The Express Tribune, Dr Shagufta of Mamji Hospital criticised the government for the delay. “The flyovers have been under construction for quite a long time now and are becoming a source of trouble for everyone,” she said. “Vehicles queue up for hours to cover a distance which hardly takes few minutes when there is no traffic bottleneck.”

She then discussed myriad health issues which have surfaced as a result of the slow pace at which the project is being completed. “If I may say so, the construction of the flyovers is a mess and causing severe health problems. But who’s going to listen?”

Dr Muhammad Rafiq another doctor at Mamji Hospital, advised people to take alternate routes and avoid constant contact with the dust released because of the construction. “Asthma attacks, allergies and other problems can be evaded if the situation is dealt with wisely and proper precautions are taken.”

Despite several attempts, KMC administrator Syed Hashim Raza Zaidi was not available for comment. However, the administrator’s secretary, Absar Ahmed Khan, said that the delays in the project stemmed from “financial issues which have now successfully been dealt with.”

When asked to comment about people’s complaints about breathing problems caused by the construction, he said, “KMC does realise that the delay might be causing problems. But all of this is just short-term. People should look at the long-term benefits which will be accrued from the project.”

Chastised and rebuked, PPP decides to convene an APC on law and order