New US ambassador in Libya married to counterpart in Pakistan

New US ambassador in Libya married to counterpart in Pakistan 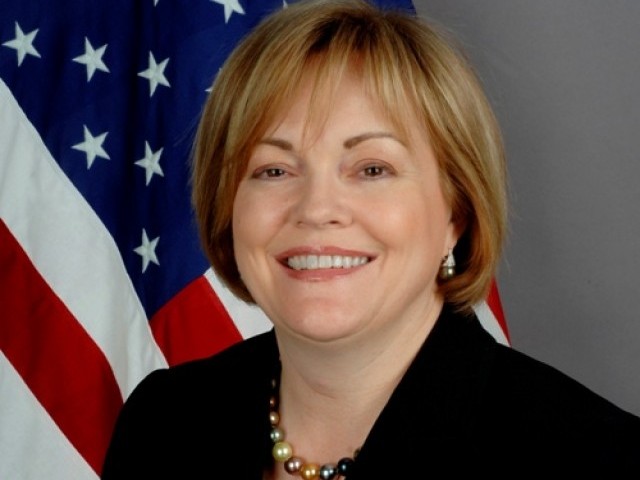 Deborah Jones previously served as the US ambassador in Kuwait. PHOTO: WIKIPEDIA

TRIPOLI: The new US ambassador to Libya arrived in Tripoli on Wednesday, an embassy source said, nine months after her predecessor and three other Americans were killed in an Islamist attack in Benghazi.

Jones succeeds Chris Stevens, a popular figure among the Libyan people, who was killed along with the other three when Islamists overran the Benghazi mission and a nearby CIA annexe on September 13.

Despite a Libyan and FBI-led investigation, no one has been charged with the killings. The incident, just weeks before President Barack Obama was re-elected, remains a political football, with Republicans accusing the administration of a cover-up.

Jones, a fluent Arabic speaker who is married to the current US Ambassador to Pakistan Richard Olsen, has served much of her career in embassies around the Arab world, including in Iraq, Jordan and Syria.

From 2008 to 2011, she was ambassador to Kuwait, and has been working at the Middle East Institute in Washington since then.

At her swearing-in last week, she acknowledged it would take time for democracy to take firm hold in Libya, but praised the Libyan people’s commitment to such ideals.

“The Libyan people endured 42 years of rule by intimidation. They courageously defeated a dictator and are now determined to experience governance by representation,” she said, referring to long-time dictator Moamer Kadhafi, ousted in 2011.