A fight raged for 12 hours betwee­n two groups after a man was killed in Kalri.
By Faraz Khan
Published: June 10, 2013
Tweet Email 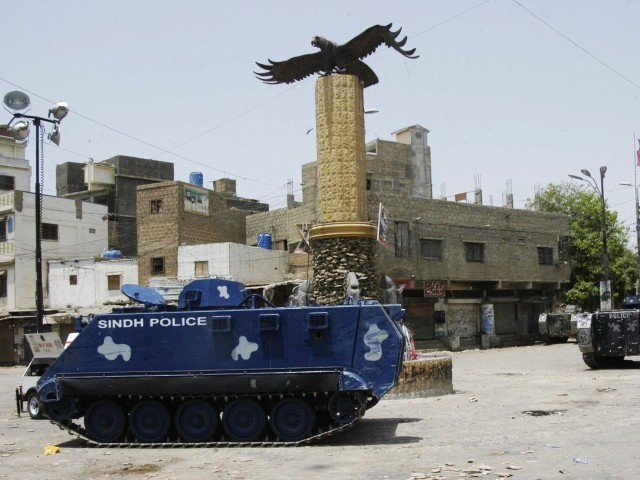 After a lull of a couple of weeks, yet another wave of violence swept over Lyari on Sunday, leaving four dead and 18 injured in its wake.

After the bout of violence in the area about three weeks ago, the IGP and chief secretary had formed a peace committee under the supervision of deputy commissioner South Mustafa Jamal Qazi. The 10-member committee — which had law enforcers and members of the Kutchi Rabita Committee (KRC) as well as the outlawed Peoples Amn Committee — was to restore peace in the area.

But a clash broke out between KRC and a rival group shortly after a young man, Arif Baloch, was killed and his friend was injured in Kalri late Saturday night. While talking to The Express Tribune, SHO Haji Sanaullah said, “The [rival group] believed that KRC broke the ceasefire agreement by attacking their men.” He added that law enforcers have yet to ascertain who attacked Baloch and his friend.

Residents say violence in the area flared up quickly because law enforcers were absent. After the peace committee was formed, seven Rangers pickets were set up along the area which forms a border between the strongholds of the two rival groups. But residents claimed the pickets had been unmanned for the last two days.

While talking to The Express Tribune, one of the residents said, “Perhaps the Rangers were scared the gangsters would retaliate to their operations and fled for their lives, leaving all of us in danger.”

The residents claim more than half-a-dozen hand grenades and about a dozen other explosives were lobbed during the clash, which raged for over 12 hours before law enforcers were able to cool things down. Among those who lost their lives during the spike in violence was a 24-year-old woman.

Lyari SP Sardar Najam Tareen refuted allegations that the police hadn’t acted in a timely manner to put an end to the bloodshed. While commenting on the absence of Rangers from the troubled spot, SP Tareen said, “They left the area because they feared an attack after they killed gangsters in an encounter.” A spokesperson for the Rangers insisted, however, that personnel from the law enforcement agency had been present in Lyari.

While explaining the reason behind the clash, Lyari police chief said that different communities residing in the area had been on uneasy terms with each other. The community that Arif Baloch belonged to blamed the other for his death, and chaos ensued.

While talking to The Express Tribune, KRC leader Hussain Kutchi said, “We always bear the brunt, regardless of whether we are actually at fault. If the law enforcers take action against gangsters we get hit. If Muttahida Qaumi Movement makes any statements in our favour, then certain groups attack us.” He claimed that some gangsters are also attacking the Kutchi community for not supporting the Pakistan Peoples Party during the elections.

The gangsters have captured the Kutchi-dominated areas including Bihar Colony, Agra Taj Colony and Al-Falah Road, added the KRC leader. He said the government’s peace committee didn’t play a role and KRC will step down from it within a couple of days if the situation remains bleak.

PPP MPA Javed Nagori said that some people belonging to the Baloch community were being blamed, even when they weren’t at fault. “The rival group attacked them,” he claimed.