Manning said to be 'very political' but effective in Iraq

Manning said to be 'very political' but effective in Iraq 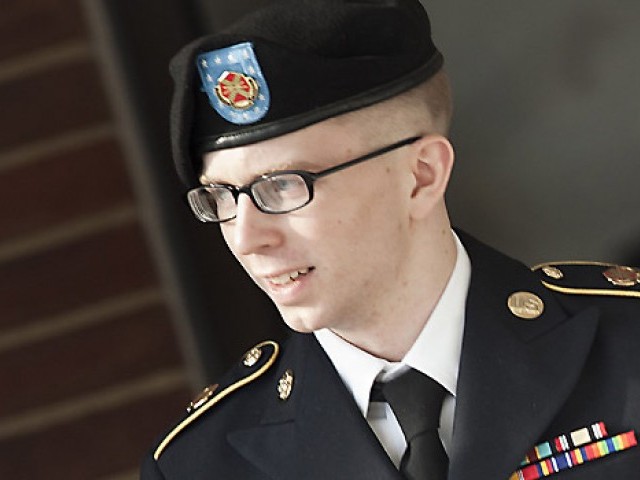 FORT MEADE, MARYLAND: Bradley Manning, the soldier who passed a trove of secret US files to WikiLeaks, was politically outspoken but excelled in computers and did his job well, his army commanders said Wednesday.

On day three of Manning’s court-martial, it became clear the prosecution will seek to prove that he was trained in how to handle classified information before he was deployed to Iraq and knew the dangers of it falling into enemy hands.

Such an argument signaled the US government’s determination to push ahead with the charge that Manning, 25, knowingly aided the enemy, chiefly al Qaeda, by transmitting hundreds of thousands of diplomatic cables as well as Iraq and Afghanistan war logs to the anti-secrecy website headed by Julian Assange.

Manning, a former military intelligence analyst, has already pleaded guilty to 10 offenses but denies the most serious charge, for which he faces life imprisonment if convicted.

On Wednesday, however, the court heard evidence of a parallel image of Manning as a well-organised soldier who produced work at the high end of the scale for his level of experience.

“He did put together some extremely good products,” said Warrant Officer Kyle Balonek, noting that he never experienced problems with Manning or noticed any drop-off in the standard of his work during his time in eastern Baghdad.

Former army specialist Jihrleah Showman, of Hamilton, Georgia, who deployed to Iraq with Manning in late 2009 and was his supervisor at Forward Operating Base Hammer, also spoke about Manning’s technical skills.

“He indicated to me that he was very fluent in anything computer. There was nothing that he could not do on a computer,” Showman testified at the Fort Meade military base in Maryland.

Showman, his immediate superior, said she and Manning had chatted outside work, where the accused had revealed his social likes, technical skills and lowly opinion of the security standards of US government systems.

“Passwords were not complicated and he could get through them,” Showman said, noting that Manning was “the one guy I knew who had the computer knowledge” to solve any problems she experienced in Iraq.

She added: “He talked a lot about wanting to attend martini parties in the Washington, DC area, that he loved shopping and had enjoyed working as a barista at Starbucks.”

Manning’s civilian defense lawyer David Coombs has so far sought to portray Manning as a naive but well-intentioned citizen who conducted the massive data dump because he wanted to start a public debate about what he had witnessed.

Asked by Coombs if the accused was “very political,” and “on the extreme Democratic side,” Showman replied: “Yes.”

Showman was among several soldiers who viewed the “Collateral Murder” video, which caused an international outcry when WikiLeaks released it on the Internet, and which figured prominently in Manning’s arrest.

The US Army recording of two Apache attack helicopters gunning down at least 12 people in Baghdad, with an audio tape of the pilots calling the victims “dead bastards,” caused massive embarrassment to the Pentagon.

That video was available on a drive to which all personnel in Manning’s unit had access, but a non-disclosure document bearing his name and signature, dated September 17, 2009, was shown to the court as the prosecution continued to argue the accused had wantonly disregarded his commitment to the United States.

Coombs painted a picture of a slack work environment in Iraq in which the accused and his colleagues played music, games and movies while on duty.

Warrant Officer Balonek, however, denied this. “When work was low it became allowed,” he said of soldiers spending their time on such pursuits rather than on intelligence work.

Two other commanders agreed that Manning was effective in gathering intelligence, one of whom, Chief Warrant Officer Hondo Hack, said he “had never seen a more organised soldier,” during his 20 years’ service in the army.