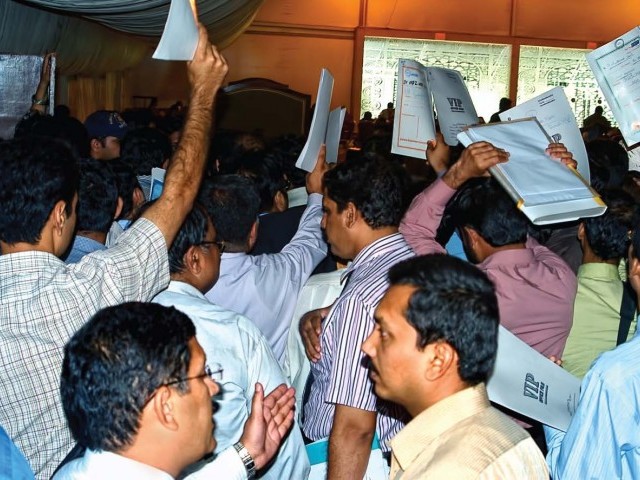 Most of the 3,000 senior doctors in Punjab have applied for the positions. PHOTOS: IJAZ MAHMOOD/express

LAHORE: As many as 1,500 Pakistani doctors a day are being interviewed in Lahore to fill 2,000 positions in the Kingdom of Saudi Arabia.

The Saudi health ministry authorities are interviewing doctors in several categories for one-year contract based jobs. The specialists being recruited include orthopedic surgeons, dental surgons, neurologists, pediatricians and emergency physicians.

The interviews began on September 27 and are scheduled to go on till October 5. A 25-member panel of the Saudi health ministry has so far selected 200 doctors, a registration desk staffer told The Express Tribune.

Several applicants, the Tribune talked to, mostly working in public sector jobs, said that their salaries range from Rs19,000 and Rs45,000 per month. If they succeed in getting the contract, the applicants said, they would receive a salary in the range of Saudi Ryal 5,500 and 35,000 per month, besides usual perks.

Dr Azeem, a senior medical officer from Rahim Yar Khan, said that he looked forward to constructing a house and starting a family. He said that he would never be able to undertake these tasks from his salary.

The government of Pakistan spends approximately Rs2 million on every doctor during his MBBS programme, a University of Health Sciences (UHS) spokesperson said.

Dr Talha Sheerwani, a Young Doctors Association (YDA) leader, said he was astonished to see the number of senior doctors who had applied for the positions.

He said that there were around 3,000 senior doctors in the Punjab. The loss of these experienced doctors, he said, would be a huge setback to the country.

He said that doctors can be persuaded not to go abroad by increasing their salaries and improving their service structure. Its first step, he said, the government should appoint a doctor to the position of the health secretary instead of a bureaucrat.

Dr Fida Hussain, a resident doctor, said that the government could stop the brain drain by adopting better policies. He lamented that the doctors moving to the Saudi Arabia would never be appointed as heads of departments.

“They never appoint non-residents to senior posts,” he said.

A renowned professor of urology, seeking one of the positions who requested not to be named, said that he had 35 years experience in his field while the panel interviewing him had no person more than 35 years of age.

The applications are being processed through Saudi Arabian representatives like Overseas Employment Corporation (OEC), Al-Najam, Al-Quresh and Fauji Foundation.

An OEC official, helping applicants, said that the number of applications they had received was far in excess of the vacancies.

Dr Sheerwani said that the Saudi Arabian government had hired around 1,200 doctors in March 2010.

He said that the package offered by the Saudi government was too attractive for a Pakistani doctor to ignore. For entry-level positions, he said, the basic salary was in the range of Saudi Ryal 5,500 to 8,000 per month along with four return tickets and 25 holidays per year and free accommodation.