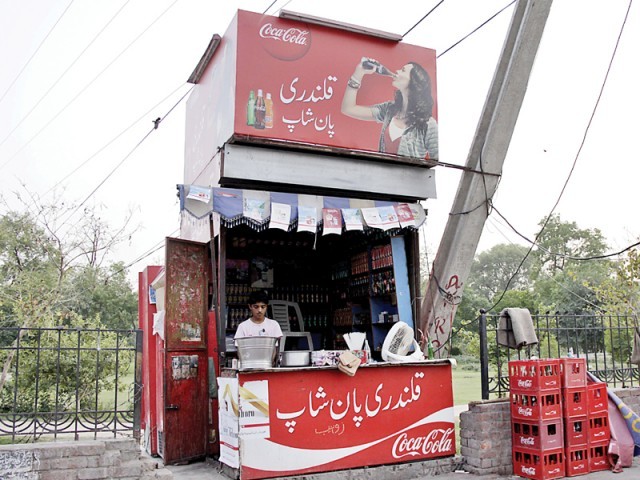 Muhammad Akbar, the owner of Qalandri, claimed to have permission from both the Lahore Development Authority and the PHA.

LAHORE: The government has in recent years engaged in several drives to remove encroachments from busy city streets, but a privileged few roadside stalls, or khokhas, have somehow survived despite being a traffic nuisance.

There are at least four popular stalls set up on green belts or in public parks: Bholi Juice Corner, which sells sugarcane juice, on a greenbelt near Liberty Roundabout; Qalandri Pan Shop and Nazir Pan Shop, in Jam-i-Shirin Park in Liberty; and a stall selling dahi baray (dumplings in yoghurt) on a green belt near the Punjab University hostels.

A warden at Liberty told The Express Tribune that during rush hour, traffic at the roundabout was often hindered by customers who stop their cars near Bholi Juice Corner. “When we try and move the cars parked there, we often end up in a quarrel with the motorists, who blame the authorities for allowing a juice corner at such a place,” he said.

Another warden said that the road in front of Jam-i-Shirin Park, where the pan shops are located, is usually very busy. “Even so people stop their cars and run to the pan shops for a cigarette or a lighter. We ticket them, but it happens all the time,” he said.

Bholi Juice Corner used to be located inside the same park, but was taken down six years ago in a drive against encroachments. It was later set up again at the green belt near the roundabout, for which it has a deal with the Parks and Horticulture Authority (PHA) till 2015.

A year and a half ago, the popular paratha market at Jam-i-Shirin Park was taken down in an anti-encroachment drive, but Qalandri Pan Shop, located a few feet away, remained untouched. Nazir Pan Shop was shut down in a similar drive four years ago, but reopened a few months later at the same location.

Muhammad Akbar, the owner of Qalandri, claimed to have permission from both the Lahore Development Authority and the PHA. He said that the previous owner of the shop, Sheikh Muhammad Younis (who passed away four days ago), had the support of a prominent politician from the PML-N and so “we were never touched during any operation”.

A juice shop was removed from next to Qalandri Pan Shop a few years ago. Ata Muhammad, the owner of that stall, said that he had previously been backed by a politician from the PML-Q. After the PML-Q lost its place in government, he could no longer resist anti-encroachment officials, he said.

PHA Zone 5 Director Chaudhry Tehseen said that no kiosk was allowed to operate in any park, unless it catered to the needs of the users of the park. Asked about the stalls at Jam-i-Shirin Park, he said that the LDA had granted them permission to operate there many years ago, before the PHA was formed. The PHA and the owners of the stalls were currently engaged in litigation over the matter, he said. The dahi baray kiosk near the Punjab University hostel had a similar story.

Tehseen said that Bholi Juice Corner had won the right to its location near the Liberty Roundabout at an auction, but added that the agreement would not be renewed once it ended in 2015.

Advocate Azhar Siddique was of the opinion that green belts and parks could not be used for commercial purposes, neither by rent nor by lease. He said that there were various judgments of the Highs Courts that backed his interpretation.

He said that the use of green spaces for commercial purposes was a violation of articles in the Constitution relating to fundamental rights and quality of life. He said that PHA should abstain from allowing kiosks at green spaces.

He said that sometimes when such matters ended up in the courts, they took a long time to decide as the authorities would delay the submission of documents, either due to high workload or to facilitate the other side.

Disease on the rise: Prisoners suffering from piles to get doctor