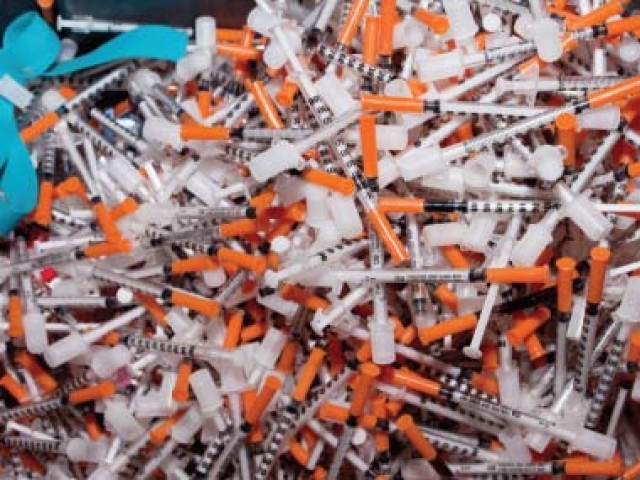 Dr Muhammad Zafar said his department has received reports of patients refusing the treatment from hospitals in Mardan, Abbottabad and a few other districts. PHOTO: FILE

PESHAWAR: The number of patients visiting government-run hospitals to avail free treatment for hepatitis C has decreased slightly after the procurement of substandard hepatitis C curing interferon injections became known to the public.

“People have been reading newspapers and are now reluctant to get free medication for hepatitis C virus (HCV) treatment,” said a doctor treating HCV patients at the Lady Reading Hospital (LRH).

He said patients are fearful they might die of the free treatment as the Anti-Corruption Establishment (ACE) team probing the incident had confirmed the death of seven people after the use of the spurious medication. “The patients prefer to get treatment at private hospitals rather than visiting state-run establishments,” he added.

On the other hand, Dr Amir Ghaffur, another doctor treating HCV patients at the LRH, begs to differ.

“We continue to run this programme. Patients visit the out-patient department and I don’t think their numbers have reduced,” he claimed.

However, Director General Health Khyber-Pakhtunkhwa (K-P) Dr Muhammad Zafar said his department has received reports of patients refusing the treatment from hospitals in Mardan, Abbottabad and a few other districts.

The managements of these hospitals have complained that the patients are afraid of getting free HCV treatment.

Zafar further added the health department had bought a new stock of HCV curing injections from another company and 95,000 vials, tested by the Central Drug Laboratory Islamabad, were available with it.

“Patients should not refuse the medication anymore. I have talked to the health secretary and will convene a meeting on Monday (today) to discuss the issue further,” Zafar informed. “We will request the media to highlight the current situation in the same manner as it did when the scam surfaced,” he added.

The issue of procurement of substandard interferon injections by the K-P Health Department came to light on February 6 when the Peshawar High Court (PHC) took notice of the supply of bogus medicines to public hospitals and directed the ACE to probe the issue and arrest all those involved.

“You are playing with the lives of underprivileged people. Those involved need to be hanged publically,” PHC Chief Justice Dost (CJ) Muhammad Khan was quoted as telling health department officials during a case hearing of the Rs250 million scam.

Another suspect, former DG Health Dr Muhammad Ali Chohan managed to obtain pre-arrest bail and tried to confirm his bail. However, his pre-arrest bail was not extended by Justice Khan and Chohan was arrested from the court room on May 24.