Former financ­e minist­er says at this point IMF will push condit­ions which would not let Pakist­an grow.
By Reuters
Published: May 24, 2013
Tweet Email 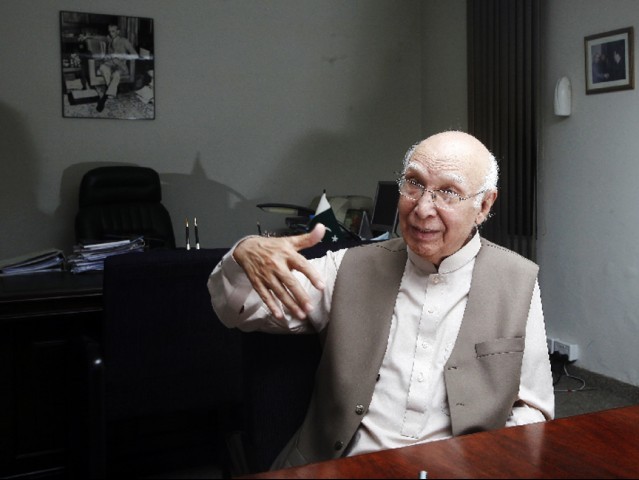 LAHORE: Pakistan’s new leadership expects first results of its planned steps to shore up its finances and ease a power crisis in two or three months and only then should decide whether and on what terms to seek an IMF bailout, senior policy adviser and former federal finance minister Sartaj Aziz said on Friday.

Most economists, lenders and rating agencies say that the nation’s finances have reached such a critical stage that a deal with the International Monetary Fund will be necessary and the sooner it comes the better.

But  Aziz, 84, who has been advising incoming Prime Minister Nawaz Sharif, and is expected to take over as his chief economic and foreign policy adviser when the new government is sworn in coming days, said a deal with the IMF now would be self-defeating.

“Right now, you can’t reach an agreement with the IMF because the kind of conditions they would impose on you would not allow you to grow,” said Aziz, who served as finance and foreign minister in Sharif’s two previous cabinets in the 1990s.

“But if our economic revival package starts working in two months, three months’ time, and it is clear that exports are picking up, our revenues are going up, then you need much less adjustment than indicated by the present situation.”

The Asian Development Bank, one of Pakistan’s major lenders, estimates it will need $6 billion to $9 billion to meet its obligations, including about $5 billion in outstanding debt on an earlier $11 billion IMF package suspended in 2011.

But Aziz said those needs may prove smaller if the economy responded to new policies.

“We may have to go to the IMF, but if we go with the revived economy then probably all we will need is a loan to cover the repayments,” he said.

Aziz said talks with the IMF were going on and did not rule out a decision sooner if a thorough review of state finances by the incoming government showed that the situation was more serious than thought.

Sharif, toppled by the military 14 years ago, swept back to power in a landmark May 11 election that marked the first transfer of power between civilian governments in Pakistan’s 66-year history, about half of which has been spent under military rule.

That, combined with a strong voter turnout and a clear majority captured by Sharif’s Pakistan Muslim League-Nawaz (PML-N), raised hopes for economic revival and greater stability.

But he takes over a country that is almost broke, plagued by a Taliban insurgency and sectarian violence, crippling power cuts and a growing army of unemployed.

The nuclear-armed country of 180 million, the world’s sixth most populous, has long been an economic underachiever, habitually relying on aid from international partners concerned about its strategic importance.

Aziz, who led work on the PLM-N’s policy manifesto, said the new cabinet would tackle in its first 100 days the most pressing challenges of power shortages and financial hemorrhage with a series of steps to cut waste and improve efficiency.

Aziz said tackling inefficiencies, clamping down on those who don’t pay bills, should help squeeze 10-12 percent more energy from the existing system, and the Pakistani people, some of whom have no electricity for 20 hours a day, should feel the difference in coming weeks.

On the budget side, the government will overhaul loss-making state firms by installing managers with private sector credentials, tighten tax collection by building computerised databases and freeze hiring by government agencies, Aziz said.

But he suggested the new administration had little appetite for quick, but painful fixes prescribed by the IMF and others – an increase in electricity tariffs and subsidy cuts and abolition of special tax exemptions granted to well-connected businesses and individuals.

Asked what concrete steps would follow Sharif’s declared intention to improve ties with India strained by a long-standing dispute over the Kashmir region, Aziz brought as examples relaxation of visa requirements, removal of non-tariff barriers and the better integration of energy systems.

Asked what concrete steps the new government would take to improve Pakistan’s security, essential to boost its investment appeal, Aziz acknowledged there was no blueprint.

“The problem is that security and foreign policy are not entirely under our control. Economic vision is under our control so we can spell it out, but what happens to Afghanistan after the Americans withdraw in 2014 also plays a role.”

Cricket: Police refuse to confirm they are investigating Asad Rauf