Call for recount: Tareen demands recount of votes in 25 constituencies

Call for recount: Tareen demands recount of votes in 25 constituencies 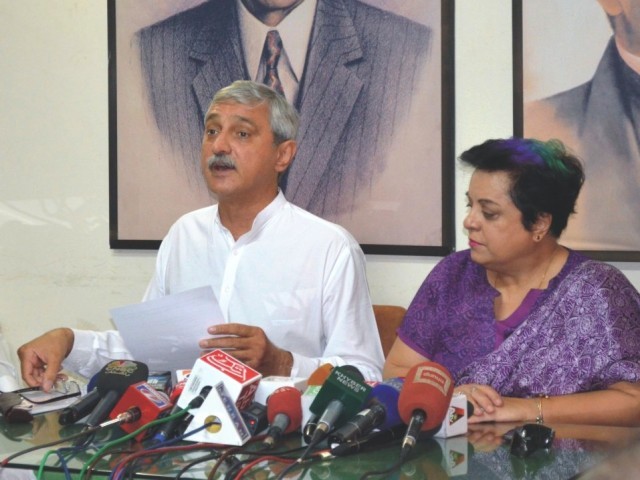 Jehangir Khan Tareen and Shireen Mazari were present from PTI during the press conference. PHOTO: EXPRESS

ISLAMABAD: Pakistan Tehreek-e-Insaf (PTI) leader Jehangir Khan Tareen talking at the Central Secretariat, demanded a recount of votes in 25 constituencies of the National Assembly, including NA-154 on the basis of thumb impression’s audit.

Addressing a press conference on Tuesday, he held the Returning Officers responsible for the alleged rigging and misappropriations that took place during the general elections. He attacked the Election Commission of Pakistan’s decision of the complainant bearing the recount expenses, calling it unfair.

To support his argument, Tareen presented an overview of accounts that reported misappropriations at the hands of the electoral staff and urged ECP to refurnish results in several constituencies including his home constituency, NA-154 Lodhran.

“My application for recount had been kept pending for three days after 14 May while my access to the record had also been denied by the election officials,” he said, while presenting his side of records to those present.

He said that out of 220 bags, the seals on 170 polling bags was broken while counter foils of around 26500 ballot papers were without the signatures and seals of Assistant Presiding Officers.

“Marked electoral rolls from five polling stations were missing while 934 unused ballot papers were also absent from the record,” he added.

Despite all the evidences of rigging, he hoped he would win the race once recounting is completed.

“Charging ten or fifteen rupees per vote from the aggrieved candidate who asks for a thumb impression’s audit due to apprehensions about rigging or misappropriation in the polls is completely unfair,” she said.

“It will also deny justice to the voters.”