Can’t get enough: Soaring profits not enough for cement industry

Can’t get enough: Soaring profits not enough for cement industry 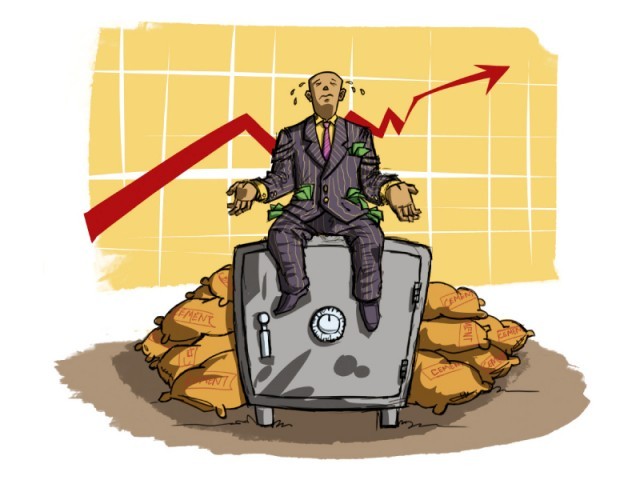 Gross profit margins in Pakistan’s cement industry have gone up to nearly 35% during the first three quarters of fiscal 2013. ILLUSTRATION: JAMAL KHURSHID

If there is one industry that has absolutely no reason to complain right now, it is the cement manufacturing sector in Pakistan. Profits have soared so much that it no longer makes sense to measure them in percentages, but rather how many times they have multiplied. And yet, executives in the cement industry lose no opportunity to complain about how the government is absolutely ruining their sector by not giving them all the goodies they ask for.

At an event organised by the cement industry at the Serena Hotel in Islamabad on Monday, executives who spoke to The Express Tribune complained constantly that their industry was supposedly suffering financially and needed government assistance, using arguments that are simply not true.

That claim is verifiably false. According to data provided by the All Pakistan Cement Manufacturers Association, the industry’s own lobby, cement production for the first ten months of the financial year ending June 30, 2013 was up 4.1% compared to the same period of the previous year.

The industry also claims that its overall costs are rising. “The prices of coal [a key input] are going up and transportation costs have also risen substantially,” said Amr Reda, CEO of Lafarge Pakistan Cement.

That claim does not square with the facts. “Coal prices have fallen 21% year-on-year to an average of $86 per ton during the first nine months of fiscal 2013,” wrote Farid Aliani, an analyst at BMA Capital, in a note issued to clients earlier this month.

The overall cost of production has actually gone down in relative terms. Gross profit margins in Pakistan’s cement industry have gone up to nearly 35% during the first three quarters of fiscal 2013, compared to 26.7% in the same period in the previous year, according to a report issued by BMA Capital.

But executives do not just claim that costs are going higher. They also claim that this is affecting their exports. “Cement export has also come to a halt due to higher costs of production,” said Farid Fazal, marketing director at DG Khan Cement, the nation’s second-largest producer.

Yet the numbers tell a different story. According to the Trade Development Authority of Pakistan, the industry exported $421 million worth of cement during the first nine months of fiscal 2013, up nearly 23% compared to the same period last year. That would hardly classify as “coming to a halt” by any stretch of imagination.

A look at more financial numbers would be instructive: profits in the 20 listed cement companies (out of the 21 that exist in the country) reached nearly Rs28 billion for the first nine months of the financial year ending June 30, 2013, up an astounding 182% compared to the same period last year. By comparison, profits for the entire fiscal year 2012 were lower than Rs20 billion. And financial results from the final quarter of the year have yet to come in.

And even 2012 had been a record-breaking year, with the cement industry recording its highest profits ever. Compare that performance to fiscal 2011, when the industry had so many loss making companies that they all but wiped out the profits made by some of the bigger players. Even taking into account only the profit-making companies in the sector, one gets to a total sector profitability of Rs5.7 billion for fiscal 2011. Include the loss-making companies and that number goes down to Rs720 million.

Even with the most conservative calculation, the sector’s profits at least tripled last year, and are set to grow even higher in 2013.

The cement industry is, by no stretch of the imagination, doing badly and is only poised to do better as the new administration, dominated by the infrastructure-friendly Pakistan Muslim League Nawaz, is set to increase government spending on projects that are likely to only further cause an increase in demand for all sorts of construction materials, including cement.