Supers­tar’s wife says that her kids are the secret to her fitnes­s.
By IANS
Published: May 17, 2013
Tweet Email 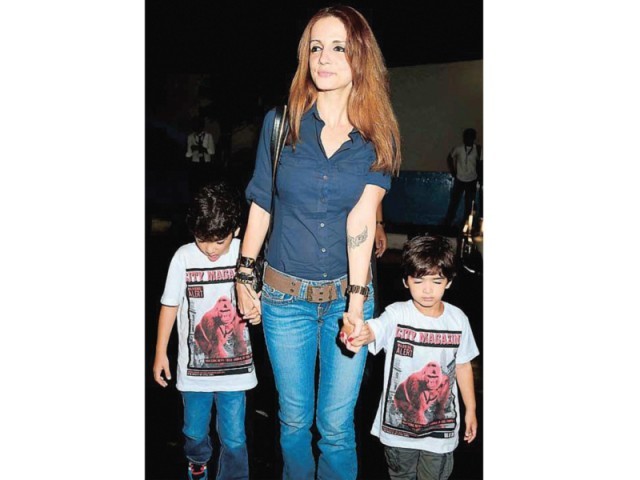 Suzanne says running after her children keeps her energetic all the time. PHOTO: FILE

NEW DEHLI: While most women in Bollywood thrive on all sorts of yoga techniques to keep in shape, actor Hrithik Roshan’s wife and popular interior designer, Suzanne Roshan says that being a working mother and constantly running after her kids is what keeps her fit and energetic at all times.

A mother to two sons, Hrehaan and Hridhaan, Suzanne says, “I am a very hardworking mother and my kids keep me fit.” She believes that it is not easy being a working mother; juggling two things at a time. “I have got two sons and they are seven and five and I believe that the most difficult thing in this world is to be a working mother. Being a working mother doesn’t give you a chance to be lazy.” She added, “It means that you are always on the go and that I think keeps me fit and motivated.”

With an Associate of Arts Degree in interior designing from Brooks College in California, Suzanne first started working for her mother Zarine Khan’s interior firm. Now, she is a businesswoman and a designer on her own with her venture, Suzanne Roshan’s House of Design.

Suzanne, who has also designed Rani Mukherji and Priyanka Chopra’s place, talked about her passion for designing. “I have always been a design student and my mind was focused on designing from a young age. So, for me, creativity is a very satisfying and motivating process,” she said.

Although she is well-known for her work, Suzanne is not the only star wife whose interest lies in interior designing with Twinkle Khanna, Akshay Kumar’s wife, also joining the race. When asked if the competition has intensified, she said, “I do my work with only one intention and that is that I have to think differently. Nothing else matters to me. I don’t get involved in any other things, they are all my friends.”

Mira Nair is not afraid of failing: Naseeruddin