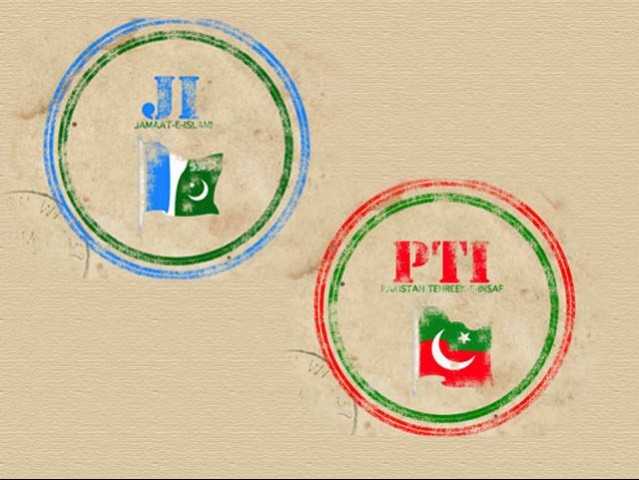 PTI and JI to jointly form government in K-P.

Having officially secured seven seats in Khyber-Pakhtunkhwa provincial assembly, Jamaat-e-Islami (JI) announced on Wednesday that they will be joining with Pakistan Tehreek-e-Insaf (PTI) to form a government in the province.

Hasan, along with JI general secretary Liaquat Baloch and other party members, discussed with Imran about the government in Khyber-Pakhtunkhwa, in addition to the protests against poll rigging in other parts of the country.

After the meeting, Hasan told the media that as per initial negotiations, the JI will be given three ministries under one senior minister, Express News reported. The details of the portfolios which will be allotted to the JI will be announced by Imran Khan later.

According to a PTI spokesperson in Peshawar, PTI will also be giving ministries to Qaumi Watan Party (seven seats) and Awami Jamhoori Ittehad Pakistan (three seats), both of whom will be joining PTI in the K-P government.

The JI chief also revealed that they will be joining with PTI in their protests against poll rigging in Karachi and Hyderabad.

Elections were heavily rigged in Karachi and Hyderabad. JI and PTI will jointly protest for re-elections in these two cities

JI and PTI have been protesting against rigging in Karachi since the polls in Saturday.

JI would be given the ministries of Finance, Education and Ushar and Zakat, according to JI Secretary Information Anwar Niazi.