Both partie­s haven’t budged from their demand of fresh electi­ons across the city .
By Our Correspondents
Published: May 15, 2013
Tweet Email 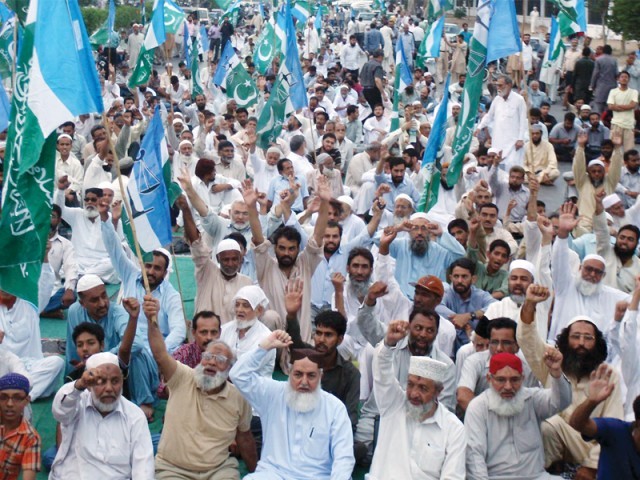 Protesters, including Jamaat-e-Islami’s Karachi chief Muhammad Hussain Mehanti, sitting outside Quaid-e-Azam’s mausoleum where the party had organised a gathering against rigging. They demanded fresh elections in all constituencies of the city. PHOTO: INP

Pakistan Tehreek-e-Insaf’s tsunami of protests against the hijacking of the elections in Karachi continued for a third consecutive day, albeit with reduced fervour.

On Tuesday evening a few hundred people got together at the Native Jetty bridge. At this demonstration, there were only a handful of people from Clifton and DHA. Most of them were residents of Keamari and hence the focus of the protests was demanding fresh polling in NA-239.

Subhan Ali Sahil, the party’s candidate for the seat, was not ready to accept defeat. He claimed the result for the constituency was announced 48 hours after the last vote was cast and conflicting reports had emerged about who had won. “I am the winner. I got 42,000 votes but there was rigging. I will keep protesting till fresh elections are held.”

For some protesters, the victory of Muttahida Qaumi Movement’s (MQM) candidate, Salman Mujahid, had come as a bit of a shock. Nazar Mohammad, a protester holding a banner calling for fresh elections, said, “There are not even 10 houses in Keamari which support MQM. They don’t have a single office here, so how can it win?” A polling agent, Jawed Abbas, said he himself caught ballot boxes crammed with kite-stamped ballot papers being carried off. Another protester, Faqeer Khan, who had wrapped a PTI flag around his head, asked that if MQM candidate Nabeel Gabol’s 187,000 votes were counted in just hours, why was there a delay in issuing the results for NA-239.

Most protesters were in the mood to make merry and kept dancing to the beat of the party’s songs despite leaders telling them to stop. “Why are you dancing? You should be protesting!” came the demand from the loudspeaker.

The protesters had cordoned off the bridge with their vehicles. Arif Alvi, PTI’s candidate for NA-250, was present at the protest and reiterated his demand. “We want re-elections across Karachi and thumb impressions on ballot papers checked so that rigging can be exposed.”

Another place, another protest

Jamaat-e-Islami (JI) also held a sit-in outside Quiad-e-Azam’s mausoleum in the evening.

Participants shouted slogans against MQM, which they accused of hijacking the entire city and filling ballet boxes with bogus votes.

Speaking at occasion, JI chief Muhammad Hussain Mehanti said MQM hijacked polls across the city on May 11 with the support of the Election Commission of Pakistan (ECP). “MQM candidates have got over 170,000 votes which are totally bogus. Karachi’s citizens will not accept the results,” said Mehanti. He demanded fresh elections in all the constituencies of the city in the presence of the army.

To a question regarding the fairness of the ECP, JI’s chief said that when the Chief Election Commissioner was first appointed, his party welcomed the decision as they thought him fit for the job. “Later on it came to the fore that Fakhru bhai had been ‘taken over’ by MQM.” He also criticised ECP for setting up polling station at a distance of two to three kilometers away from the voters’ residences. He also claimed that the poling staff was from MQM. Mehanti hoped all parties would join JI in the protest so that “Karachi could be freed from MQM’s terrorism.”

“The MQM has not won the elections which is why they did not hold Youm-e-Fatah [day of victory] and are hiding in Nine Zero – they can’t face the people of the city,” said Mehanti. He said his party will submit a petition in the Supreme Court against the rigging. “I hope the Chief Justice of Pakistan will take notice of the rigging and provide Karachi’s citizens some respite from extortionists.”

Nasim Siddiqui, the general secretary of JI’s Karachi chapter, said the aim of the protest was to free Karachi from MQM’s terrorism and demanded re-elections in the city under the army’s supervision.

“The ECP has deliberately snatched the right to vote from Karachi’s people.”

PML-N, MDM demand re-polling in all polling stations of NA-250

Over a 100 activists of Pakistan Muslim League – Nawaz (PML-N) gathered at the Qayyumabad roundabout on Korangi Road and pelted passing vehicles with stones in plain view of law enforcers. Protesters shouted slogans against the rigging in NA-250.

Saleem Zia, PML-N’s candidate for PS-113, led the protesters. They were joined by Maulana Aurangzeb Farooqi, the chief Ahle Sunnat wal Jamaat (ASWJ) which fielded candidates under the banner of the Muttahida Deeni Mahaz.

Addressing protesters, Zia demanded fresh elections in all polling stations of NA-250, not just 43 of them. “We want the army to be deployed at each polling booth to prevent rigging,” he said.  He claimed that Farooqi was winning the race for PS-128 by 11,000 votes, but overnight, the result was changed. “The May11 election was the worst in the history of Karachi as hidden powers changed the result overnight.”