The late vice chance­llor of NED Univer­sity was known for his punctu­ality.
By Noman Ahmed
Published: May 10, 2013
Tweet Email 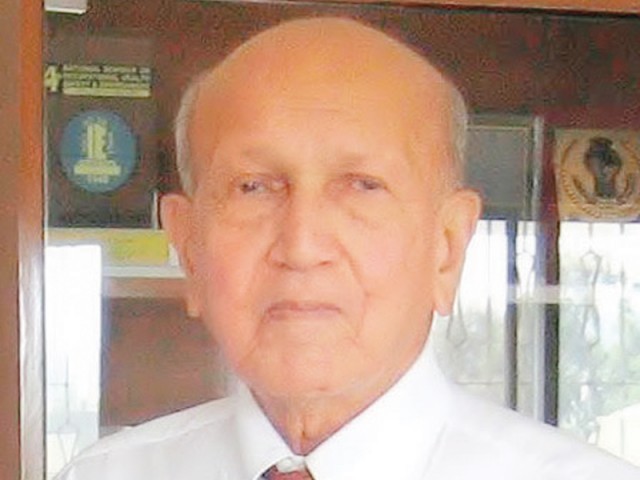 KARACHI: Engineer Abul Kalam, the country’s longest serving vice-chancellor among the public sector universities is no more. He died at the age of 90 at the South City Hospital on Thursday after a brief illness and a long life full of achievements.

“I won’t think of it now, I’ll think of it later,” said 90-year-old Engineer Kalam with a wistful smile in his last interview with The Express Tribune when asked about his life to come. “After all, tomorrow is another day.” The interview took place a couple of weeks before his last day at the university on March 18, 2013 when Engineer Kalam presided over the 21st convocation of the NED University of Engineering and Technology – the last of his impressive 16-year feat.

Engineer Kalam was born on November 25, 1923 in the South Indian city, Vijayawada. At the age of 17, he received an acceptance letter from the University of Cambridge but circumstances did not permit him to leave India in the wake of World War II. The same year he completed his graduation in Mathematics from the prestigious Loyola College, established under the University of Madras, in Chennai. Later in 1941, Engineer Kalam obtained his post graduation from the same institution.

After working as a private consultant for 13 years, he was appointed as the NED University vice chancellor by the then-governor Kamal Azfar on December 10, 1996.

Although he never went for a PhD – a prerequisite for the vice-chancellor’s office as laid down by the Higher Education Commission – the institution came a long way under his administration. “When I joined the office, the university used to offer four-year bachelor programmes in only four engineering disciplines but now there are 22 disciplines,” he had said.

He was known among journalists for his punctuality – from convocations to meetings to other appointments, Engineer Kalam gave value to every single minute. He would arrive every morning at the university at 8:25am – five minutes before the official time – and was known not to leave his office before 4:25pm when the university point buses begun to take the students back home.

Even at convocations, if the chief guest failed to arrive on time, Engineer Kalam would go ahead with the event. “At such occasions, I felt that it was my responsibility towards the hundreds of invited guests,” he had said. The university registrar, Engineer Javed Aziz Khan, recalled that Engineer Kalam as the vice chancellor did not like to sit idle, though he had to because of his quality of taking decision within seconds. “He never stalled matters for days, no matter how important the decision was or its consequences.”

When the official files failed to reach at his table for some time, he used to call Javed Khan. “Javed, I feel as if I am unemployed. It has been an hour and I haven’t received any file from you or any other official,” Javed Khan told The Express Tribune, quoting the late vice chancellor.

The registrar recalled that during those uneasy hours of ‘unemployment,’ Kalam used to read literature, especially classics and newspapers.

The funeral for the renowned educationalist was held after Asar prayers at the Abu Bakr Mosque in the Defence Housing Authority, after which he was laid to rest at the DHA graveyard. He left behind a wife, two sons – Faisal Shamsi and Jamal Shamsi – and a daughter.

Owais Muzaffar calls upon the people to help PPP win