Uncle and nephew, who head own factio­ns of JWP, say govt denyin­g them entry in Dera Bugti
By Mohammad Zafar
Published: May 9, 2013
Tweet Email 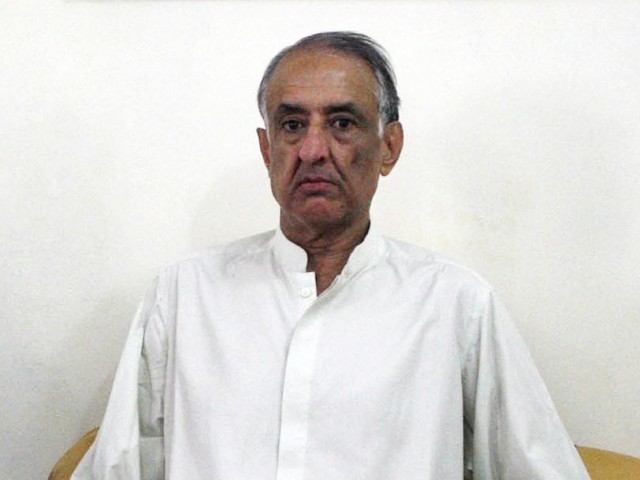 Talal Bugti says that his party feels that despite clear orders of the Supreme Court, JWP is pushed to the wall and powerful elements are using all their links in this regard. PHOTO: ONLIE

Political situation in one of the most restive areas of Pakistan and home to the Sui gas, Dear Bugti, took a turn on Wednesday when Talal Bugti and Aali Bugti, both heads of their factions of Jamhoori Watan Party, announced boycott of polls.

They alleged that the government wants a pro-establishment leadership in Dera Bugti and was therefore denying entry of Bugti tribesmen who were displaced during the army operation of 2007.

Chief of the Bugti tribes Nawab Aali Bugti on Wednesday announced that his faction of Jamhoori Watan Party-Aali (JWP-A) would boycott the elections as the internally displaced Bugti tribesmen were not allowed to enter their villages by the government functionaries.

His spokesman, Mir Durhan Bugti, told The Express Tribune that the Bugti Nawab had received threat to life if he tried to enter the Bugti Tribal Territory.

Aali Bugti, the grandson of slain Baloch leader Nawab Akbar Bugti and nephew of Talal, had earlier moved to Kashmore from where he had planned to enter his tribal domain along with displaced tribesmen.

After receiving threats from functionaries and other pro-government elements, the young Bugti chief decided to put off his plan to reach Dera Bugti and resume his responsibilities as head of the tribe besides contesting elections for PB 24 comprising Dera Bugti District.

Durhan Bugti claimed that the government and its functionaries are backing Sarfraz Bugti and disallowing others to participate in the electoral process.

Pre-poll rigging is evident in Dera Bugti and the scheduled elections are not free, fair and transparent as claimed by the rulers and the Election Commission, he said.

Addressing a press conference at Bugti House in Quetta, Talal Bugti said that he would not contest elections from NA 259 and 260, adding that his party felt that despite clear orders of the Supreme Court, JWP was pushed to the wall and powerful elements were using all their links in this regard.

He said that the purpose of participating in election was to raise voice against the atrocities being carried out in Balochistan and to make accountable forces who have encroached upon the rights of the people of the province.

He said even today tortured and mutilated bodies were being dumped around. He expressed fears that it was possible that collective graves could be discovered in Balochistan as the recovery of thousands of missing persons has not been made possible to date.

“Free, fair and transparent election doesn’t seem possible in Balochistan given the attitude and approach adopted towards Balochistan,” Talal said and added that the fact of the matter is selection has already been done in Balochistan.

He said the person of Nawab Akbar Bugti is highly venerated in Balochistan and therefore, his party was pushed to the wall, adding that the institutions have decided not to let the people of Balochistan to use their right of vote.

He said that his party had knocked the doors of superior judiciary for justice and despite its clear directives, the Bugti refugees were not rehabilitated and his son, Shazain Bugti, was not even allowed to enter his hometown Dera Bugti which is tantamount to compelling them to take to the mountains.