3,000 metric tonnes per day of furnac­e oil will be provid­ed to AES Lalpir Powe.
By Zafar Bhutta
Published: May 9, 2013
Tweet Email 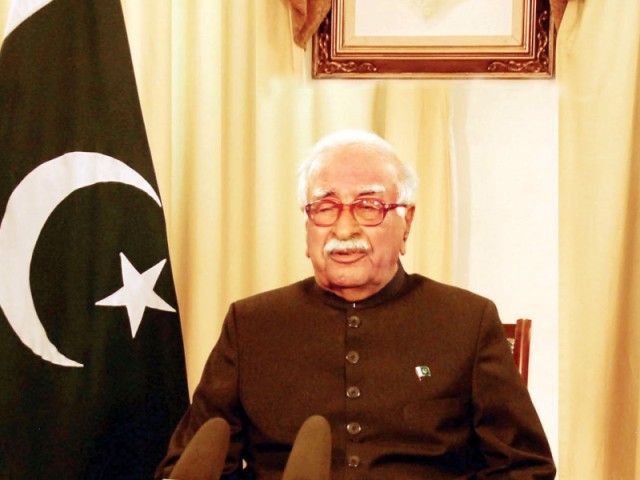 The prime minister also directed introduction of a summer dress code to facilitate the federal government employees at workplace after imposition of the ban. PHOTO: APP

Caretaker Prime Minister Justice (retd) Mir Hazar Khan Khoso has decided to impose a ban on the use of air conditioners in all government departments and offices from May 15.

According to a press release issued on Wednesday, the measure “reflects the resolve of the government to manage the power crisis by management of demand.” The ban is to continue till “there is substantial improvement in the energy situation of the country,” it added.

The prime minister also directed introduction of a summer dress code to facilitate the federal government employees at workplace after imposition of the ban.

All public servants have been given seven days to prepare for observance of the dress code, the press release said.

Fuel to plants on credit

In order to prevent load-shedding on the day of the elections, the caretaker government has directed the cash-strapped Pakistan State Oil to provide fuel to four power plants on credit for the month of May.

A PSO spokesperson said that as per the directives received from the ministry of petroleum and natural resources, it has begun supplying 3,000 metric tonnes per day to AES Lalpir Power and will soon commence the delivery of another 1,000 metric tonnes to Atlas Power Limited.

“Additional talks are underway with Kohinoor Power regarding terms of payment and supply is expected to begin in the near future,” the spokesperson said.

An official of the petroleum ministry said the state-owned corporation had no fuel supply arrangement with the four power plants on credit, but the government had nonetheless directed it to provide the fuel on credit basis for one month to prevent power outages on May 11.

But he said this would put additional burden on PSO as it was already facing a financial crunch due to the non-payment of dues it was owed. The official added that the power sector was to provide a payment commitment plan, but it had not done so thus far.

An official of the ministry of water and power said that the petroleum ministry was providing 150 million cubic feet per day (mmcfd) in gas to the power sector and was yet to provide an additional 38 mmcfd to ensure an uninterrupted supply of power during the elections.

In this regard, the petroleum ministry has established an ‘Oil and Gas Control Cell’ to guarantee continuous supply of oil and gas during the polls. The ministries of water and power and petroleum have been tasked to ensure uninterrupted supply of electricity and gas.

The concerned ministries and other departments will coordinate to make sure oil and gas is available for the power sector and to keep petrol stations, CNG stations and telephone and mobile phone networks functioning on May 11 so that the polls are conducted smoothly.