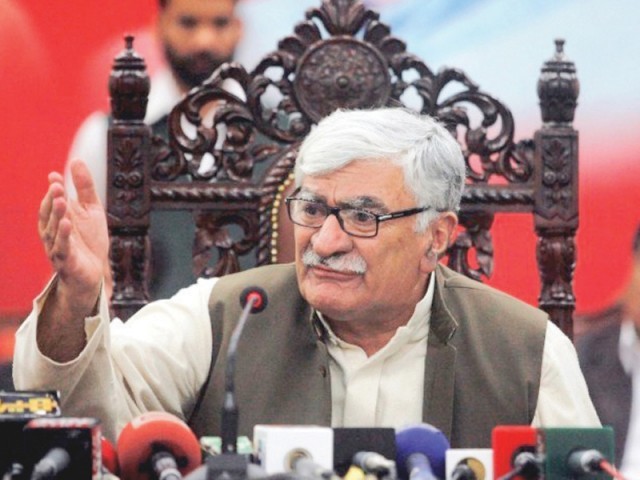 ISLAMABAD: His party is under siege. It has borne the brunt of Taliban violence together with other liberal political groups. He is disillusioned but outspoken. Asfandyar Wali Khan, the chief of Awami National Party (ANP), blames the election authorities for their ‘failure’ to provide security to election candidates.

“It appears that Hakimullah Mehsud [Tehreek-e-Taliban Pakistan chief] and not Fakhruddin G Ebrahim, is heading the Election Commission of Pakistan (ECP),” Asfandyar told The Express Tribune in an exclusive interview on Sunday.

The TTP has vowed to target moderate and liberal-minded political parties like the ANP, Muttahida Qaumi Movement (MQM) and Pakistan Peoples Party (PPP) in its attempt to disrupt next week’s parliamentary elections. So far, the group has mounted several attacks on the three parties in parts of Sindh, Khyber-Pakhtunkhwa and tribal regions.

“It appears that Mehsud decides who should and who shouldn’t contest the elections,” said a bitter Asfandyar. “There is no hope when the referee [ECP] is reluctant to protect the election candidates against violence,” he added. His party has repeatedly threatened to take legal action against the ECP for its decision of decreasing security protocol of its leaders in the run-up to the elections.

While the political campaigns of right-wing parties are in full swing, the ANP, MQM and PPP haven’t been able to canvass for votes. “How can we campaign while our politicians and supporters are dying in targeted attacks?” asked Asfandyar. “Our hands have been bound while the killers are running amok.”

The ANP chief said that his party was being compelled to pull out of the elections. On Saturday, a senior leader of the party, Mian Iftikhar Hussain, said that the relentless strikes against some political parties would make the election result suspect.

Notwithstanding the deadly Taliban violence, Asfandyar said that he still ‘believes in peace negotiations’ with the militants. However, he blamed other political leaders for their apathy. “All our efforts to make peace with the TTP ended up in smoke, because PML-N president Nawaz Sharif, JUI-F chief Maulana Fazlur Rehman and Jamaat-e-Islami Ameer Syed Munawwar Hassan, refused to cooperate.

In February, the TTP had said in a video message that the group was willing to enter into peace negotiations with the government if Nawaz, Maulana Fazl or Munawwar Hassan acted as guarantors. But Asfandyar complained that “none of these politicians are willing to take the initiative”.

On the political front, Asfandyar unleashes a volley of criticism against Pakistan Tehreek-e-Insaf chief Imran Khan, who dubbed him as ‘American agent’ in his speech at a public rally on April 4 in Peshawar. “If I’m an American agent, then Imran is an agent of Jews,” said Asfandyar in a bitter tone.

Incensed by Imran’s scathing criticism of top political leaders of the country, Asfandyar said that the PTI chief “considers himself Alexander the Great who would take over Pakistan”.

He accused Imran of violating all norms of politics and using indecent language against his political rivals. “Imran has failed to become a popular leader. Now, he’s desperate. And in his desperation, he’s badmouthing all his rivals,” said Asfandyar. Surprisingly, Asfandyar doesn’t agree with leaders from mainstream political parties who believe that Imran would win popular votes in the May 11 elections.

Asked about the possibility of forming a coalition government with PTI if the party wins majority in the elections, the ANP chief said, “It’s too early to talk about alliances and coalitions.