The family return­ed to India earlie­r than planne­d citing the ill health of Singh's daught­er as a reason.
By Rana Tanveer / Web Desk
Published: May 1, 2013
Tweet Email 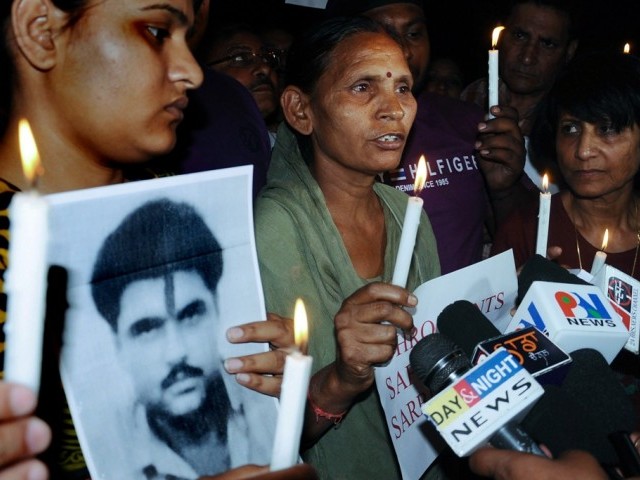 The family had arrived in Pakistan on April 28 on a 15 day visa but suddenly left after citing the ill health of Sarabjit’s daughter as an excuse. It was revealed that Dalbir Kaur, Singh’s sister went to India to mobilise a campaign for the return of her brother.

Dalbir Kaur told The Express Tribune that she would meet with United Progressive Alliance chairperson Sonia Gandhi and other important figures to get their support in bringing her brother back to India.

Awais Sheikh, counsel of Sindh in Pakistan said the response of Pakistani doctors proved unsatisfactory for Kaur who is now going to try to bring doctors from India. Kaur blamed the jail authorities for the ill treatment of Singh while talking to the media at Wagha Border.

She pointed out that since the barracks of Indian prisoners were separate from those of Pakistani prisoners in the Kot Lakhpat Jail, there is no way the attacks could have happened without the involvement of the jail authorities. She claimed jail officials made rods, bricks and blades available for the attackers so that Singh could be attacked.

Advocate Sheikh said he is planning to file a writ petition in Lahore High Court seeking permission to allow the inclusion of two Indian doctors in the panel of medical practitioners treating Singh in Jinnah Hospital.

The Press Trust of India reported on Wednesday that the Indian Ministry of External Affairs had received confirmation from Pakistan for once-a-day consular access to Sarabjit Singh.

Singh had suffered a head injury when a scuffle between prisoners broke out last week which rendered him unconscious. He is currently being treated in Jinnah Hospital.