US report warns of crisis for Pakistan minorities

US report warns of crisis for Pakistan minorities 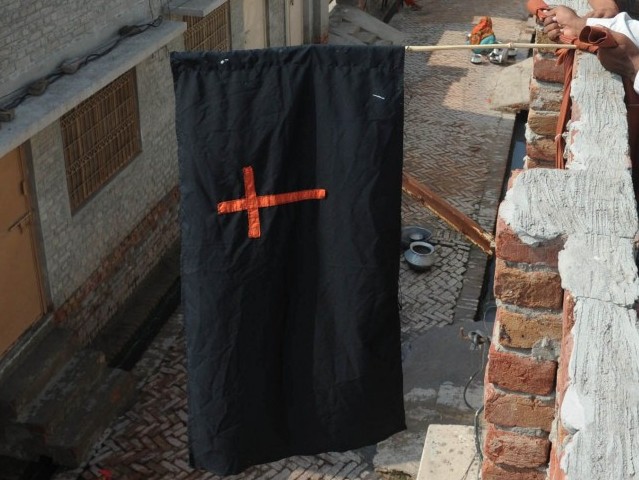 A Pakistani Christian resident hangs a flag with the cross symbol at his home in Korian on August 30, 2012. PHOTO: AFP/FILE

WASHINGTON: A US government-appointed panel urged Washington Tuesday to step up pressure on Pakistan over religious freedom, warning that risks to its minorities have reached a crisis level.

In an annual report, the US Commission on International Religious Freedom also raised concerns about what it called a worsening situation in China, as well as problems in Egypt, Iran, Myanmar, Saudi Arabia and other nations.

The commission, which advises the government but does not make decisions, called for the United States to designate Pakistan, among eight other countries, as a “country of particular concern,” meaning it could be subject to sanctions if it fails to improve.

Assessing the year through January 31, the commission said religious freedom violations in Pakistan “rose to unprecedented levels due to chronic sectarian violence” that targeted the Shia Muslim minority.

“The government continues to fail to protect Christians, Ahmadis and Hindus,” the report said, charging that blasphemy and other laws “are widely used to violate religious freedoms and foster a climate of impunity.”

Sunni Muslim extremists over the past year have killed hundreds of Shias in Pakistan, especially Hazaras – a community originally from Afghanistan that is known for its comparatively liberal attitudes.

“Pakistan is in a crisis right now with these particularly severe violations of religious freedom,” said Knox Thames, the commission’s director of policy and research.

The commission, whose members are appointed by President Barack Obama and Congress, said Pakistan faced the most serious violations of religious freedom among any country not already on the blacklist.

The State Department has not previously issued the designation for Pakistan, with which the United States has had a close but prickly relationship since the September 11, 2001, attacks.

Along with Pakistan, the commission urged the State Department to add Egypt, Iraq, Nigeria, Tajikistan, Turkmenistan and Vietnam to the list.

The report said that religious freedom in China “deteriorated significantly” in the past year, especially for Tibetan Buddhists and Uighur Muslims.

The commission criticized China’s closure of unauthorized churches and what it said were “long-term imprisonments, forced renunciations of faith and torture in detention” against members of the banned Falungong spiritual movement.

The report voiced concern over Myanmar, also known as Burma, where a recent Human Rights Watch study said at least 211 members of the Rohingya Muslim community were killed in religious violence since June 2012.

The violence comes as Myanmar undertakes democratic reforms and warms relations with the United States. The report urged Washington to maintain the leverage to reimpose sanctions to press Myanmar to address minority issues.

Set up under a 1998 law, the commission recently went through reforms initiated by senior Senator Dick Durbin who had voiced concern over charges of anti-Muslim bias.

The latest report backtracked on the previous year’s controversial call to blacklist close US ally Turkey over the Muslim-majority but staunchly secular state’s treatment of Christians.

In a first, the report dedicated a chapter to Western Europe in which it raised questions about the ban in secular France and Belgium on Muslim women wearing veils in public.

The report does not cover the United States, where incidents last year included a massacre at a Sikh temple that left six dead.