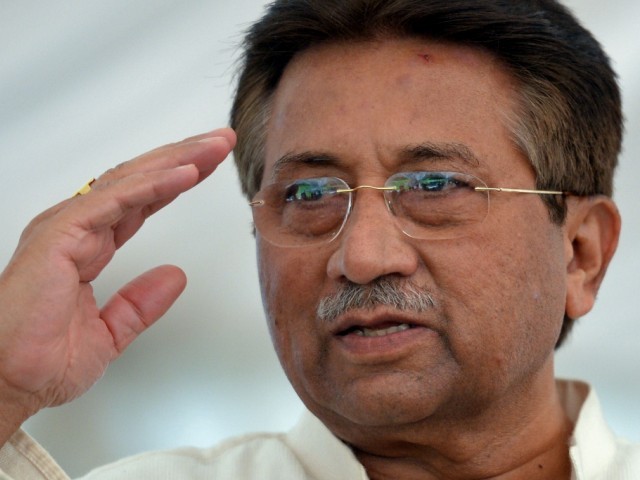 RAWALPINDI: Former military ruler Pervez Musharraf will spend Pakistan’s general election day under lock and key after a court Tuesday extended his house arrest over the murder of Benazir Bhutto.

An anti-terrorism court in Rawalpindi put Musharraf on 14-day judicial remand over the death of the former prime minister, who was assassinated in a gun and bomb attack in 2007.

The retired general was already under a two-week house arrest order set to expire on May 4, over the sacking of judges when he imposed emergency rule in November 2007, and did not appear in court in person.

“The court granted a 14-day judicial remand and ordered that Musharraf be kept in a judicial lock-up until May 14,” prosecutor Chaudhry Zulfiqar told AFP.

The order was made to give investigators time to work on the case and the regular hearing is due to begin on May 3.

Musharraf is accused of conspiracy to murder two-time prime minister Bhutto, whose Pakistan People’s Party (PPP) came to power in February 2008 on a wave of sympathy over her death.

It is the second of three cases, dating back to his 1999-2008 rule, for which Musharraf has been arrested since returning to Pakistan on March 24 after four years of self-imposed exile.

Musharraf is being held at his palatial house on the edge of Islamabad where his party complained that he has been confined to two rooms and stripped of his personal staff.

He also has been threatened with death by the Taliban.

Musharraf returned to Pakistan last month to stand in the May 11 general election, vowing to “save” the country from militancy and economic collapse but he was barred from running and will now spend polling day in his Islamabad villa, which has been designated as a jail.

Nobody has ever been convicted or jailed for Bhutto’s assassination. Musharraf’s government blamed the killing on Pakistani Taliban chief Baitullah Mehsud, who denied any involvement and was killed in a US drone attack in 2009.

But Bhutto’s son, Bilawal Bhutto Zardari, who is PPP chairman, has accused Musharraf of her murder.

In 2010 a UN report said Bhutto’s death could have been prevented and accused Musharraf’s government of failing to give her adequate protection.