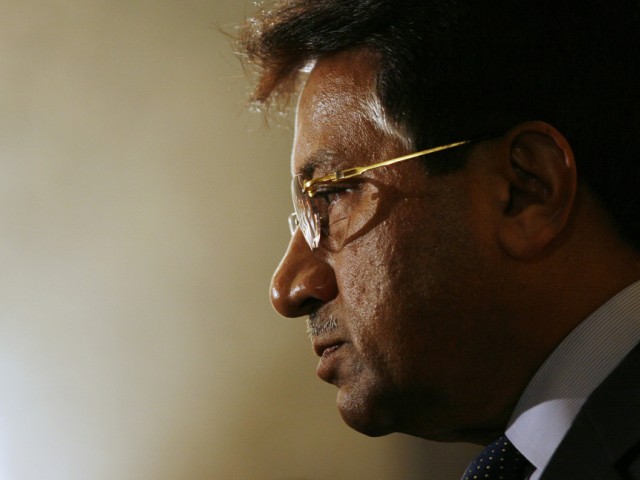 Musharraf’s counsel argued that condemning his client for the abrogation of the constitution would be discriminating as no other dictator had ever before been tried under the High Treason Act of 1973. PHOTO: REUTERS

The Supreme Court received a lesson in history on Monday when former president Pervez Musharraf’s counsel argued before the apex court that condemning his client for the abrogation of the constitution would be discrimination since no other dictator had ever before been tried under the High Treason Act of 1973.

The argument came as Advocate Raja Muhammad Ibrahim Satti, member of a team of lawyers defending the former military ruler, told a three member bench of the apex court that treason trials against all former implementers, abettors and collaborators of martial laws since 1956 should be initiated simultaneously.

Comprising Justice Khilji Arif Hussain, Justice Ejaz Afzal Khan and Justice Khawaja, the bench was hearing up to six identical petitions seeking initiation of treason charges against Musharraf. “The judiciary’s role in validating successive martial laws in the past is not something to be proud of,” argued Satti, highlighting that treason charges should also be brought against all those who conspired for, collaborated in or refused to object to successive abrogation of the constitution since 1956 – a year which finds mention in the High Treason (Punishment) Act.

Satti said “we have all been voyaging in the same boat since 1956,” and Justice Khawaja replied that “this boat full of people should be sunk.”  Recalling history, Satti said that the martial law imposed by former president Iskander Mirza in 1958, was validated by the Supreme Court on the grounds that the president continued to hold office and the act was deemed in the interest of the State.

Meanwhile the court ordered the federal government to provide reasonable opportunity to all lawyers representing Musharraf to meet their client. The lawyers had complained that they had not met their client for the last four days.

The petitioner Advocate Muhammad Ashraf Gujjar, had challenged the notification issued by chief commissioner Islamabad, through which the former president’s Chak Shahzad farmhouse had been declared a sub-jail.