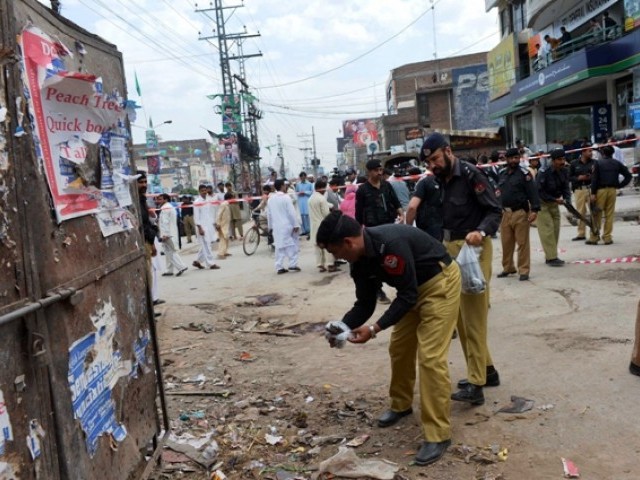 Pakistani policemen inspect the site of a bomb blast in Peshawar. PHOTO: AFP

PESHAWAR: A suicide bomber killed at least eight people and wounded 45 others when he rammed his motorcycle into a bus on University road near Azam Tower in Peshawar on Monday, police said.

The attack targeted a senior official in the city administration, Sahibzada Anees, who passed by shortly before the blast in the Jehangir Abad neighbourhood.

“At least eight people were killed and 45 others were wounded in the suicide bombing,” police official Mohammad Faisal told AFP.

“The commissioner, who passed just a minute before from the road, was the target of the bombing, but he escaped unhurt as the bomber missed the target and struck his motorcycle into a passenger bus,” Faisal said.

Body parts of the suicide bomber were also found at the blast site, he added.

The road, where the blast took place, is one of the busiest roads in Peshawar. Nearby cars were damaged and passengers were affected by the blast.

The injured were shifted to the Khyber Teaching hospital where an emergency was declared. An emergency was also declared at two other hospitals in the city.

Seperately, a bomb went off outside the election office of independent candidate Nasir Khan Afridi in the Maqsoodabad area of Peshawar, killing three people and wounding more than 19, on Sunday.

Violence has spiked in the nuclear-armed country ahead of national elections on May 11 with at least 56 people killed in attacks targeting politicians and political parties since April 11, according to an AFP tally.