Another day of mourning: Reign of terror

Another day of mourning: Reign of terror 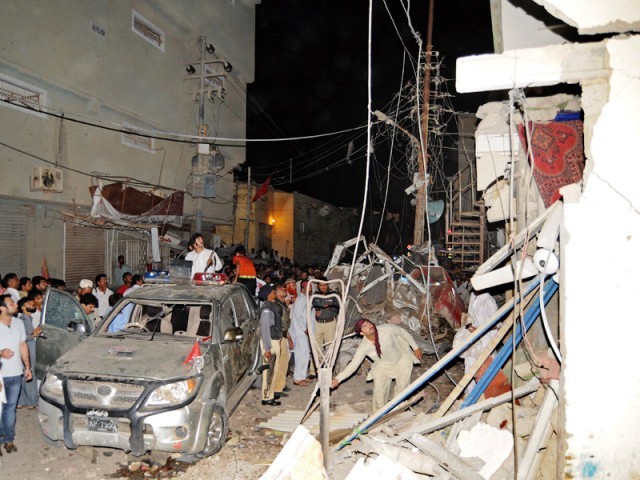 A BDS expert said the device contained ball bearings and nut bolts, and that a cellphone mechanism was used to detonate the bomb. PHOTO: MOHAMMAD NOMAN/EXPRESS

In what was the third major attack on political parties in Karachi this week, at least 11 people were killed and 45 injured when a bomb exploded at the Awami National Party’s corner meeting in Orangi Town’s Quaid-e-Awan Colony on Friday.

The corner meeting, which ANP General Secretary Bashir Jan was to address, was to take place in an empty plot in Quaid-e-Awan Colony around 9:45 pm. As soon as Bashir’s car approached the venue a bomb exploded, killing both onlookers and party workers. Bashir Jan himself was unhurt.

Predictably, the Tehreek-e-Taliban Pakistan (TTP) quickly claimed responsibility for the attack. “We have carried out two attacks on ANP candidates one in the morning and another on Friday night,” said TTP spokesman Ehsanullah Ehsan.

The deceased include Dr Azizuddin – brother of Mufti Nizamuddin Shamzai – and two dispensers who worked at his clinic. Dr Azizuddin, a father of five, has been running his dispensary in the area for thirty years. His 10-year-old grandson was also killed in the attack.

Investigators believe the blast might have been caused by a remote-controlled device planted in a high-roof vehicle parked outside the plot.

“Right now we are only guessing as to how the blast took place and who is behind this act,” Deputy Inspector General (District West) Zafar Bukhari told The Express Tribune. However, other police officials say the bomb may have been planted in a rickshaw.

Bukhari estimated that approximately 15 kilogrammes of explosives was used in the device, given the intensity of the blast. Asked about the security arrangements for the meeting, he claimed that the police had not been informed of the ANP’s plans.

He added that according to the code of conduct, political parties should inform the police 72 hours in advance of holding a procession, a corner meeting or a rally. In this case, he says the ANP did not inform the police of this event in time.

Following the attack, the ANP leadership called for a peaceful day of morning, but said that shops should remain open and public transport should not be affected. However the private schools association said that all affiliated schools would remain closed. Some schools had planned to open on Saturday to make up for lost classes due to strikes following the attacks on MQM offices this week.

Earlier during the day Abdul Rehman Khan Yousufzai, the ANP candidate for NA-255 escaped a bomb blast in Landhi’s Old Muzaffarabad Colony. He was driving from his residence to his constituency when the explosion took place.

“I was getting the tyres of my jeep inflated when a powerful blast took place,” Yousufzai said. The ANP candidate was still in his jeep when the blast occurred, and while he escaped unhurt, two children present in the area received minor injuries.

Initially, police termed the blast a cracker attack. However, the bomb disposal squad stated in its findings that it was an Improvised Explosive Device, weighing about 200 grams that caused the explosion.

A BDS expert said the device contained ball bearings and nut bolts, and that a cellphone mechanism was used to detonate the bomb.

While it was Karachi that bore the brunt on Friday, election-related violence took place in other parts of the country as well.

A Jamiat Ulema-e-Islam (Fazl) candidate, Haji Muhammad Hashim Shahwani, escaped an assassination bid on Friday when his convoy was attacked with a remote-controlled bomb in the Mach area of Kachi district, in Balochistan. The attack left six people, including a levies constable injured.

Balochistan Levies head constable Asadullah told The Express Tribune that the JUI-F candidate for PB-30 (Kachi-I) was attacked in the Hark area of Mach. Shahwani, however, escaped unhurt. A case has been registered and investigation is under way.

In a separate incident, a hand grenade was hurled at National Party’s (NP) office on Quetta’s Sariab Road neighbourhood, but no one was injured in the attack.

According to the police, unidentified persons lobbed a hand grenade at the NP office from a nearby street causing a large explosion. The NP’s office, along with the Pakistan Muslim League Functional’s office was damaged. Police was informed an hour after the incident took place and an investigation is under way.

Left for dead: Sarabjit Singh critical after assault in jail