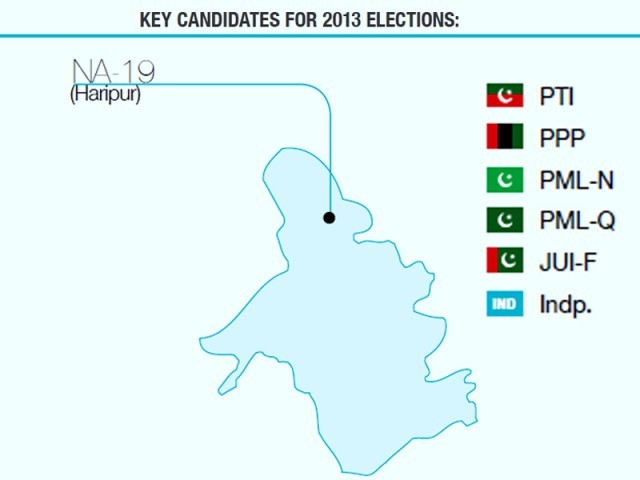 The Haripur district first garnered worldwide attention when military dictator Ayub Khan imposed martial law in 1958. In the six following decades, little has changed in NA-19 – one of the most important constituencies of the Hazara division.

Today, scions of three influential families – the Tareens, Gujjars, and Rajgans of Khanpur – are in the race for the seat. Analysts, however, say the main competition is between the PML-N, the PPP and the PTI.

Despite a small tribal vote bank, the Tareens have dominated the political scene since Ayub’s takeover. Those who remained active in politics from this family include Ayub’s brother Sardar Bahadur Khan; his sons, Akhtar and Gohar Ayub Khan; and grandsons, former provincial minister Yousuf, former minister of state for finance Omar and former speaker of the NWFP (now Khyber-Pakhtunkhwa) Assembly, Maj (Retd) Habibullah Khan Tareen.

Gohar Ayub Khan contested repeatedly in 1977, 1985, 1990, 1993 and 1997, defeating his rivals each time. He joined the Pakistan Muslim League-Quaid before the general election in 2002, and fielded his son, Omar, as the party’s candidate, as he himself did not have a bachelor’s degree.  In turn, Omar benefited from his father’s vote bank and landed a thumping majority.

However, as the nation’s satisfaction with the PML-Q dropped, Omar lost to Pakistan Muslim League-Nawaz candidate Sardar Mushtaq Khan in 2008. Soon after, he and his father jumped ship to the PML-N, finally winning its ticket after 10 years. This year, Omar will contest NA-19 from the PML-N platform.

Other players in the ring

Mushtaq has joined the Pakistan Peoples Party (PPP) bandwagon, after being peeved that he was not taken into confidence before Gohar and Omar were inducted into the PML-N.

He shook hands with the PPP leadership on the condition that various mega projects would be undertaken in Haripur, including the reconstruction of Khanpur Taxila Road and the establishment of a medical college. As Mushtaq brings with him a considerable vote bank, and the PPP has never won the seat in six decades, the leadership consented. Former premier Raja Pervez Ashraf announced these projects at a public meeting.

However, much to his chagrin, the PPP government did not deliver on a single promise. And yet, despite this, Mushtaq managed to renovate the Zafar and Chaman parks, and even provide electricity and Sui gas to some villages, from the funds he obtained during his time as PML-N’s MNA.

Another strong candidate is Pakistan Tehreek-i-Insaf’s Dr Raja Amer Zaman, son of the late senior politician Raja Sikandar Zaman. Although his family in politically influential, the under development of his area, the Khanpur Valley, is rather evident. Much like Omar, Zaman is also settled in Islamabad, and only visits his native district on a need basis. In many ways, he has failed to keep the connections of his father alive.

Analysts believe Mushtaq’s success resulted from a strong anti-Tareen feeling amongst the voters that the influential family did too little with too much. Even today, the lack of basic amenities in this resource-rich area is jarring.

Although Mushtaq’s  five years as an MNA were stained with charges of apathy,  he is still considered to be a strong contender, as he retains the largest vote bank – that of Gujjars, Awans, small ethnic groups, and PPP supporters.

On the other hand, some analysts claim that Omar’s decision of moving to the PML-N has enhanced his popularity. However, this may not be enough to help the Tareens win back the seat.

Furthermore, the enthusiastic young PTI voters will also make the upcoming competition a tough one.

Only time will tell which candidate steals away the hearts of voters.