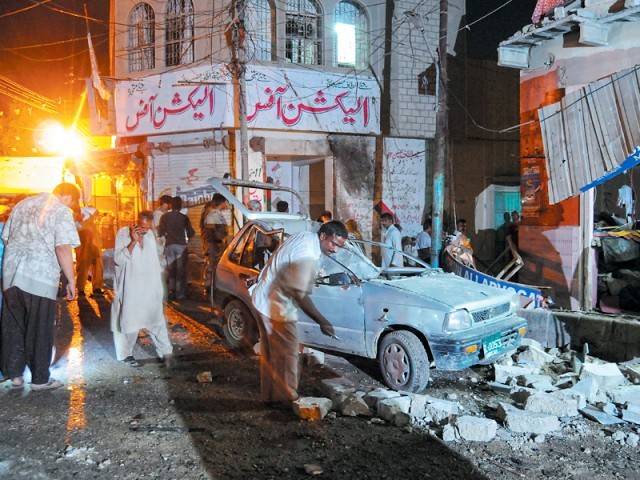 A view of the site after a bomb attack on an MQM office in the Nusrat Bhutto Colony of Karachi. PHOTO: MOHAMMAD NOMAN / EXPRESS

Barely 48 hours after a bomb attack outside a Muttahida Qaumi Movement camp office on Tuesday, another bomb blast close to an MQM election office in the city’s North Nazimabad neighbourhood left five people dead, prompting the party to call for a day of mourning on Friday (today).

The Taliban claimed responsibility for the explosion which occurred in the city’s Nusrat Bhutto Colony Chowk area. A similar assault outside an MQM office in Karachi’s Peoples Chowrangi on Tuesday killed four people and injured dozens more.

Police said Thursday’s attack was caused by an Improvised explosive device (IED) which was rigged to a motorcycle parked outside a dry-cleaner’s shop near the party office.

The targeted election office for NA-245 had been closed since Tuesday’s incident, but one of its shutters was still open and the victims were sitting on a pavement right outside.

All the deceased were activists of the MQM. They have been identified as M Bilal, Islamuddin, M Imran, Aadil Siddique and Ayub. Twelve people were injured in the blast and were shifted to the Abbasi Shaheed Hospital, where two are still in a critical condition.

According to the Bomb Disposal Squad, four to five kilogrammes of explosive material were used in the device, and BDS officials said the materials used in Tuesday’s and Thursday’s blasts were identical.

Tehreek-e-Taliban Pakistan (TTP) spokesperson Ehsanullah Ehsan claimed responsibility for the attack.  “This is in continuation of our policy to target three political parties, the ANP, MQM and PPP,” he said from an undisclosed location. “These attacks will continue,” he warned.

Following the incident, the MQM’s Coordination Committee announced a day of mourning on Friday (today).

According to a press statement, the committee appealed to traders and transporters to suspend their activities, and directed workers across the country to hold special prayers for the victims.

The associations of private schools in Karachi also announced that they will keep schools closed on Friday, in view of the MQM’s strike call. Meanwhile, the Board of Secondary Education Karachi (BSEK) again rescheduled three papers of its Matric general group students for Saturday.

MQM chief Altaf Hussain condemned the blast and expressed his sympathies with the victims’ families.

In a press statement, the MQM chief said that election campaigns are running only in Punjab. He said that the MQM, ANP and PPP were the target of militants, whose aim is to keep these parties away from polls.

Meanwhile, the MQM has postponed its rally in Nawabshah.

A wheelchair-bound activist of the PML-N was shot dead near his house in Model Colony, Karachi, on Thursday. Police said that 55 year old Raja Anees, who was the PML-N’s secretary information for PS 121, was sitting outside his house in a wheelchair when four unidentified armed men opened fire on him, fatally wounding him.

In a statement, PML-N Sindh Chapter President Ghaus Ali Shah condemned the murder, calling it a conspiracy to prevent the party from campaigning in Sindh.

According to police, Tariq was walking to Sitiana Road when men on motorcycles opened fire on her. She received bullet injuries in her leg and was immediately shifted to a hospital where she was said to be out of danger.

Meanwhile, a man was killed and another suffered injuries in a hand grenade attack on the office of PPP’s NA-260 candidate Sardar Umar Gorgage in Nushki.

Nushki Police head constable Waheed Ahmed told The Express Tribune that unidentified men riding a motorcycle hurled a hand grenade in the office of Umar Gorgage located on School Road. As a result, two people sustained serious injuries. The attackers escaped and no group has claimed responsibility for the attack yet.