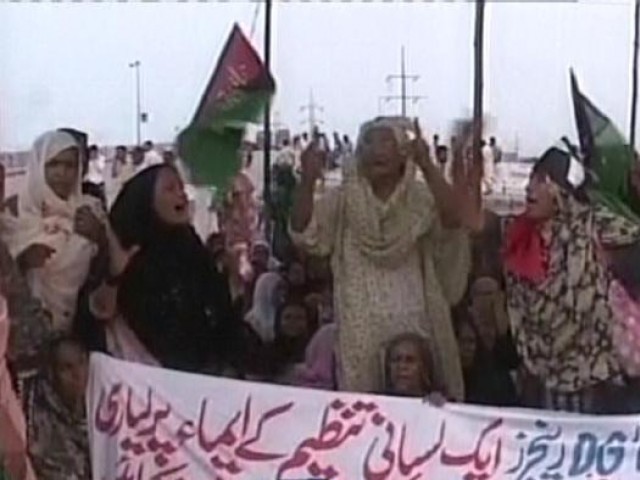 A screengrab shows women holding banners and protesting against the death of the three Lyari residents. SCREENGRAB: EXPRESS NEWS

KARACHI: Residents of Lyari continued their protest for the second day and caused traffic jams in different parts of the city, reported Express News on Thursday. They were protesting against the killing of three men from their area in an alleged encounter with the Rangers.

The protest caused heavy traffic jams on different roads of the city including II Chundrigar road, Kemari and Mai Kolachi.

Jinnah Bridge was blocked by the police using containers to control the situation.

The protestors sat in unity, carried banners and appealed to the Chief Justice of Pakistan and DG Rangers to take notice of the incident.

The residents of Lyari said they were peace loving citizens and voiced objections over innocent people of their area being targeted. They demanded monetary compensation for the families of those who were killed in the incident.

Karachi division president of the Pakistan Peoples Party (PPP) Abdul Qadir Patel said that the city’s situation was getting more violent by the day and that the caretaker government is missing in action.

Following the incident, Patel announced a day of mourning over the killings at a press conference and a score of Lyari residents, including women and children, staged a sit-in on the ICI Bridge along with the bodies of the deceased and blocked the traffic. The bodies were, however, later buried at the Mewa Shah graveyard.