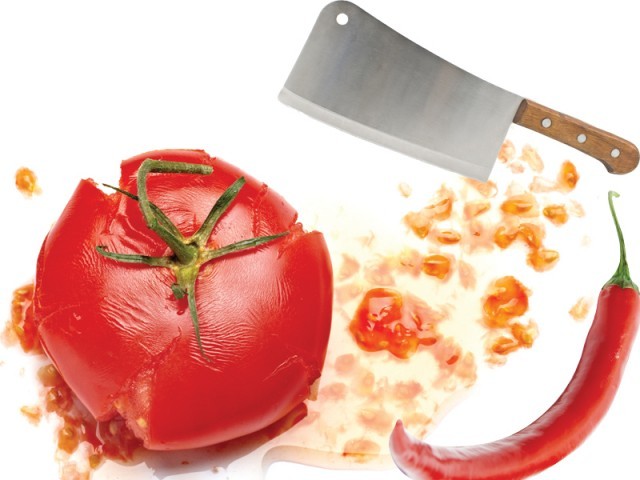 Karachi’s restaurants are finding themselves at the mercy of a brigade of amateur food critics who have no qualms biting the hand that feeds them — on Facebook. PHOTO: ESSA MALIK AND AMEER HAMZA

The knives come out on Facebook. The enzymes have not even begun to break down in the alimentary canal and the bile has already started to rise. The unhappy diner whips out their cell phone and skewers the meal on one of these two food forums: SWOT with 10,000 members and the Karachi Food Diary with 8,000. Twenty posts later the restaurant owner is toast.

These two pages on Facebook are a virtual space where Karachi food enthusiasts share their dining experiences. Restaurant and dhaaba owners and even aunties baking at home for a buck on the side can post pictures, menus, and special offers. Customers get to write reviews. Everyone can give their opinion.

And this is where the trouble starts. One member Sara Ashraf made the mistake of commenting in favour of a restaurant that was being ripped apart. She argued that its offer to compensate the unhappy customer should be accepted. In response, she was told off for “not having a developed palate” and not realising that a customer’s hard-earned money had gone to waste. “My money doesn’t grow on trees!” she retorts. “These people are NOT food critics; they are just people who ate something somewhere. The irony is they consider themselves Michelin inspectors.”

Because of our biological ties to it, food tends to have that profound effect on people. Its makers assume demigod-like proportions (even if that doesn’t translate into serving size). Its eaters, by virtue of putting it in their bodies, labour under the illusion that this entitles them a seat at the food critic’s table. Never mind that they can’t tell the difference between arugula and rocket. Paying for the meal buys them the gastronomic expertise.

Thus Karachi’s food forums have become a mini-battlefield of egos. But what caught our eye was the fighting ring this Petri dish has become. Is this an indictment of the combative nature of frustrated Karachi’ites or is it simply a case of the customer is king? We spoke to four of the characters in this arena — some Christian, some gladiator and some lion. Decide for yourself.

The grilling  Nezihe Hussain’s SWOT  (The Single Woman Over Thirty)

Founder Nezihe Hussain, who confesses to spending an average of Rs30,000 a week eating out, created SWOT in 2011 for foodies to gather and talk about where they are eating. It became Facebook’s first prominent online food forum dedicated to the city’s food scene.

Nowhere in the original plan, however, was SWOT supposed to earn the reputation of being a ‘mafia’ for which the politics of food and service at restaurants turned ugly.

“People are frustrated,” says Hussain. “They want to go out and get a bite to eat to escape from daily frustration, fears and anger. And when that goes wrong, it’s the last straw.” Hussain correctly points out that up until five years ago, just a handful of your friends would know if there was a hair in your salad. Today, your acerbic review of the extra protein on the plate will be read by thousands. Hussain shrugs. “Sellers take you seriously. If a restaurant gets it right, that’s great. If they get it wrong, they should get ready for the lynch mob.”

The lynch mob consists of less than a dozen members of the food group who will whip out the knives to jump into the fray. Positive reviews get less traction. “We have tried to curtail the lynching,” Hussain says. “We are evolving… why fight every time?”

SWOT earned a bad reputation when it introduced a tariff in January last year, according to which restaurant owners who were repeatedly promoting their business on her forum were asked to pay a fee. “The money was supposed to go for charity, with 10% going towards the account’s maintenance,” says Hussain. “I was the only person running the show at that point, but it wasn’t to compensate me — it was an appreciation of the service.”

Non-payers were allowed to interact but not promote. Soon, however, rumours started flying that she was blackmailing restaurants that did not pay by writing scathing reviews and encouraging her friends to do the same. “There were rumours that I was paid up to Rs200,000,” she laughs. “I mean, have you seen the car I drive?”

Hussain quickly removed the tariff. She says that she now tones down the aggression. “I have been told that the anger on SWOT needs to be curbed, so now I refrain from publicly criticising a place and block those who are spewing venom.”

Thirty-five-year-old Habib Paracha, the founder of the Karachi Food Diary, created this Facebook forum a year ago in reaction to Nezihe Hussain’s SWOT, which he feels was becoming “excessively biased”.

There is a lot at stake and restaurant owners take food forums seriously because the food business is massive. “There are a lot of people making a lot of money,” he says. A fine-dining restaurant in Karachi earns a profit of about Rs3 million a month.

He acknowledges that there are a lot of people who will be nasty for no good reason. “You will encounter all sorts of personalities on these forums,” he says. “Some people are bored, some are just trolls and troublemakers, and some just want to put others down and promote their own business.”

Forty-two-year-old Adnaan Chaudhry has earned himself quite a reputation. The avid food enthusiast has been banned from two groups, Haroon Leghari’s Good Food Guide Pakistan and Nezihe Hussain’s SWOT, for spewing vitriol and making personal attacks. He is now limited to posting only on Habib Paracha’s Karachi Food Diary.

His reviews are bare and words cutting, his tone dry. His verdict has become the authority, giving new restaurateurs sleepless nights. His language is so tart at times that it has scared people from participating in discussions. He cleverly deletes his posts after 24 hours to “control the direction in which the conversation is going” and he doesn’t cook much.

But he does love “lobbing a few grenades”. “Here’s my strategy: I start on a Friday. By Sunday, over 3,000 people are following, reading, gobbling up my posts,” he says with a laugh.

He feels that no one can say his food critiques are not sound. “I am not nasty for the hell of it, I am realistic. My reviews are accurate… I don’t have an agenda other than to give honest feedback.” He maintains he does not make personal attacks, a lesson he learnt after making a mistake with SWOT’s Nezihe Hussain, who used to be a good friend.

So if he’s not Pete Welles or Gordon Ramsay and just someone who likes a good steak, why does his word carry so much weight with Karachi’s restaurants? He feels that it is simply a case of the people on these food forums giving him that power. “I do have knowledge, which is why eateries value my opinion and want to talk to me,” he adds. “My positive review brings them revenue.”

Rumour has it, however, that Chaudhry ‘promotes’ friends and ridicules those who he does not care much for, implying that he is bribed for good reviews. In response to this, Chaudhry rolls his eyes. “Find one person who can say that I have accepted a bribe,” he says. “If an eatery is good, I will praise it. If it is bad, I will say so. If it has improved after one bad experience, I will say that too.”

No stranger to the kitchen, Haroon Leghari who has just opened the Clifton seafood restaurant Hook, Line & Sinker, was roasted online over a private response he gave to a Facebook complaint from a customer. The customer reproduced Leghari’s elaborate (albeit defensive) reply on the food forum, where the lynch mob devoured him.

“I’ve coined the term FFB for these people — food forum bullies,” says Leghari. “These food forums are no longer just places where one talks about their food experience — it’s a slag match capital.” People who have no idea about what actually happened with the unhappy customer unleash a free-for-all on the establishment.

“These people have a misconceived notion of freedom that Facebook has given,” he says. “It’s scary and frustrating when 200 people get together and [criticise a restaurant] when most of them can’t even cook an egg!”

After that public episode, Leghari urges people who eat at his restaurant to give all negative feedback to him personally or on HLS’s own Facebook page instead of the food forums.

Leghari firmly believes that it is not enough for a customer to just say that the food was bad. “If you can’t explain or detail what was bad about the food, how can you expect us to fix it?” he argues. “Everybody’s palette is different.”

But did the disemboweling on Facebook affect his business? “All publicity is good publicity,” laughs Leghari. “They don’t realise it, but it’s promoting my business. The day of an argument, I have 20% more business!”