Constituency: Profile Peshawar NA–2: A fight to watch out for

Constituency: Profile Peshawar NA–2: A fight to watch out for 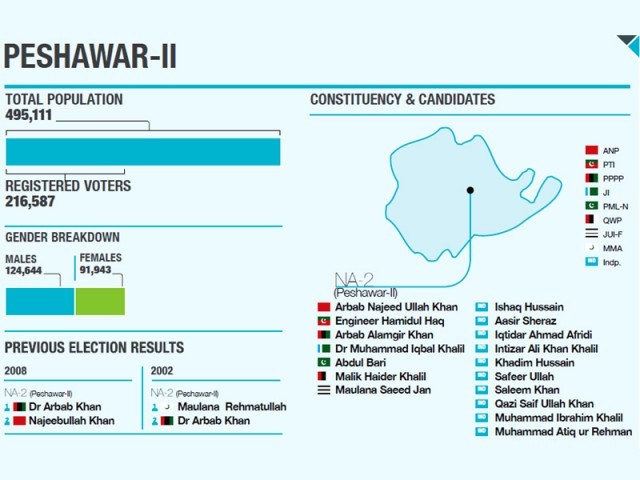 Among a multitude of contenders, close fight likely between PPP and ANP candidates.

With some new forces on the political turf including the emergence of Pakistan Tehreek-i-Insaf (PTI), the NA-2 Peshawar II, known as the constituency of Arbabs, is expected to yield an interesting competition in the May 11 election.

The constituency is also known as the only one in the country from where a couple returned to the lower chamber of parliament in the 2008 election: Arbab Alamgir Khalil was elected on a general seat while his wife Asma Alamgir was elected on a reserved seat, respectively.

Alamgir remained the federal minister of communications and Asma Alamgir was the special adviser to prime minister on state and frontier regions.

The JUI-F, unexpectedly, has allotted a ticket to a candidate who has never actively participated in politics before: Maulana Saeed Jan, who is the Muhtamim (administrator) of Darul Uloom Regi.

Jan might pocket some votes of the religiously inclined, but he may not get enough votes in the central (urban) areas to push him to the victory stand as most of the residents here are businessmen. Though many other parties have fielded their candidates, most of them are novices and hardly a threat to stalwarts.

The real contest, as political analysts predict, will occur between Arbab Alamgir, the PPP candidate, and Arbab Najeebullah Khalil, the ANP contender.

“The real competition will be between these two men as other poll aspirants do not have much popularity in the constituency,” said political activist Akhtar Khan. He added that if PTI had allotted a ticket to former squash great Qamar Zaman, it would have been a big hurdle for the two stalwarts of ANP and PPP.

Alamgir, the ex-federal minister, might have done some development work in his village Tehkal, but other parts of his poll constituency largely went neglected. Now he has a challenge on his hand: how to garner support from these areas of the electorate.

Najeebullah’s party, ANP, was unable to facilitate maintaining peace in the region, and this goes against him. However this time around, he is in a position to give a tough fight to his rival Alamgir. Najeebullah’s campaign will hit Alamgir where it hurts the most, by highlighting the fact that Alamgir predominantly ignored parts of the constituency at the expense of residents.

Najeebullah will also gain the edge by harping on the ANP sacrifices in the shape of martyred party workers across the region in the wake of its fight for peace that might fetch him more sympathy votes.

Being the son of the illustrious politician Arbab Jehangir Khan who served as the chief minister of the province from 1985 to 1988, gives Alamgir an advantage.

In the 2008 elections Alamgir had defeated Khalil by a big margin. In the 2002 elections, Muttahida Majlis-e-Amal (MMA) candidate Maulana Rehmatullah was the winner from the constituency by getting 37, 000 votes. His rival Alamgir, at that time, could get 15,000 votes only, while Najeebullah did not contest the elections.

The PPP’s former federal minister Khan Bahadur Khan won from this constituency in 1988 while former chief minister (the late) Arbab Muhammad Jehangir Khan was successful in 1990, 1993 and 1997.

The late Arbab Jehangir contested elections from this constituency from the platform of two different political parties: from ANP in 1990 and from PPP in 1997.