Ranger­s allege that three of the deceas­ed were kidnap­pers, one was an abduct­ed person.
By Our Correspondent
Published: April 24, 2013
Tweet Email 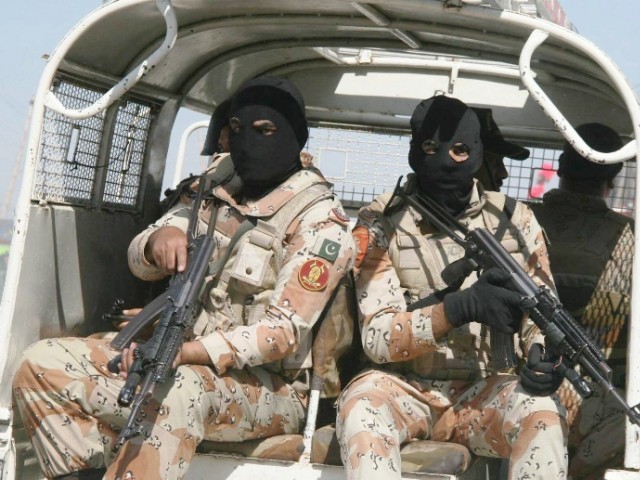 Rangers in Karachi carrying out an operation. PHOTO: EXPRESS/FILE

KARACHI: Five people, including a passerby, were killed and a Rangers official was injured in Lyari allegedly during exchange of fire between Rangers and gangsters on Tuesday evening.

Sources told The Express Tribune that the encounter between Rangers and alleged gangsters took place when the law enforcers tried to enter the area and conduct a raid at the den of the notorious gangster, Mullah Nisar aka 89. As Rangers tried to enter Nisar’s den, the gangsters reportedly opened fire at the rangers, injuring a Rangers official, Mohammad Hanif. In retaliation, the Rangers also reportedly opened fire at them. During the crossfire, a passerby woman belonging to the Hindu community, 35-year-old Shanti, was killed along with four others.

The Rangers spokesperson said that the raid was conducted at a criminals’ hideout in a bid to rescue an abducted person. The spokesperson, however, denied that the death of the Hindu woman had anything to do with the encounter. He also added that out of the four people killed in the exchange of fire, three were kidnappers and one was an abducted person.

A medical storekeeper and a customer were wounded when unidentified persons threw a hand grenade at a store in Metrovil, SITE. The injured persons were identified as Javed Mehboob and Kamran Hakeem. Initial reports said that the grenade was thrown by armed motorcyclists at the Pakistan Peoples Party’s election cell but SP Ali Asif denied any such links and said that the medical store was only attacked.

Separately, at least four workers of the Mohajir Qaumi Movement-Haqiqi were wounded when unidentified men opened fire at them near the residence of the party chief, Afaq Ahmed.

Killings in the city

A real estate agent, 28-year-old Akbar Baloch, was shot dead by two men on a motorcycle in Sher Muhammad Goth. According to police, the deceased had no affiliation with any political or religious party. The police also found the body of a young man from Lea Market Chowk. The marks on his body suggest that he had had been tortured.

Theory exams for AKU board begin from May 14