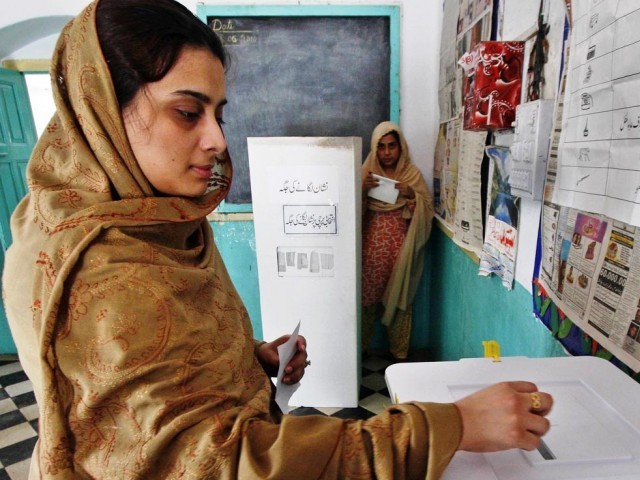 A file photo of a female voter taking part in by-elections in Rawalpindi. PHOTO: ONLINE

On February 18, 2008, 31 polling stations in Punjab swarmed with only male voters.  Not a single woman from 17 National Assembly constituencies of Punjab cast her vote in the elections of 2008 — a situation which experts agree should not be witnessed in 2013.

Political analysts and civil society activists believe that undoing a mindset is necessary to ensure women’s participation in the electoral process. “There are some social and cultural constraints, administrative issues and lack of interest in political process which hinder women from exercising the right to cast vote. It is up to the political parties, civil society organisations and Election Commission of Pakistan to educate women about the importance of casting vote,” said political analyst and rights activist Salman Abid, while talking to The Express Tribune.

The activist recommended that in order to avoid a fate similar to 2008, the election commission should make it mandatory upon each polling station to sport at least 10 percent female voters in polling records in order for results to be accepted.

Analyst Dr Hasan Askari Rizvi seemed to agree. “Sadly, the law doesn’t say that voting results of a polling station could be declared null and void if female voters don’t show up. Our political parties don’t even give tickets to women to contest on general seats in such situation — so how can we expect a satisfactory turnout of female voters?”

However, Taj Haider, a resident of NA-128 Lahore said that apart from a lack of awareness, lack of proximity to a polling station also discouraged many women from casting votes. “The polling station was located at a far-off village. But I am sure more women will head to a far-off polling station this year because of increased awareness about the importance of voting.”

Rizvi was also optimistic that this time round, the electoral process will witness increased participation by women.

National Commission on the Status of Women Chairperson Khawar Mumtaz said that the election commission will be approached this week to discuss a strategy regarding increased female participation in elections. “All political parties including Jamiat Ulema-e-Islam say there is nothing wrong in women casting their vote. When they agree on this, it is also the responsibility of political parties to make sure the women come out to cast the vote,” she maintained.