After biryani, Ali Raza Abidi tries his hand at politics

After biryani, Ali Raza Abidi tries his hand at politics 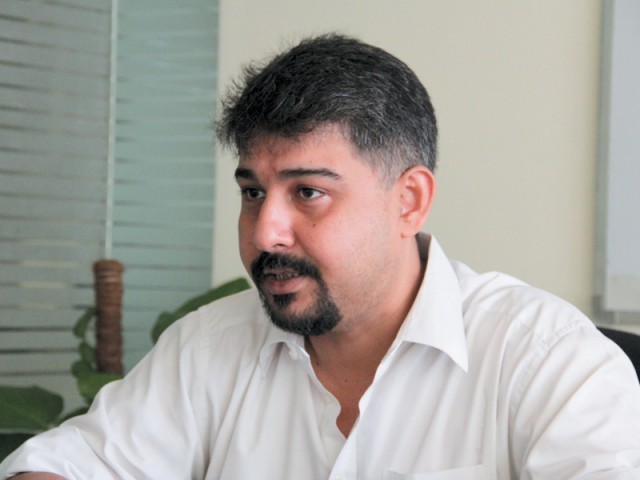 After tantalising Karachi’ites’ taste buds with a plethora of flavours, The Grillfather, Ali Raza Abidi, has developed a taste for a spicier profession – a candidate contesting the elections from the Muttahida Qaumi Movement’s seat.

Originally, the 41-year-old owner of Biryani of the Seas (BOTS) had planned to introduce an ‘election menu’, featuring a seafood platter named after the MQM, sizzling prawn tempura to be served as the Pakistan Peoples Party’s arrow and simmering tsunami prawns representing the Pakistan Tehreek-e-Insaf.

“I can’t introduce the menu now as I am too busy with the party and won’t be able to give much time to BOTS. But I am constantly aware of what is happening there,” said Abidi, who is contesting the NA-251 seat in Karachi.

The constituency was won by MQM’s Waseem Akhtar in the last elections and covers areas of Mehmoodabad. “I am overwhelmed. I respect the party’s decision of awarding me the ticket,” says Abidi, who is among the fresh candidates that the party has brought forward for the 2013 elections.

How it all started

Abidi’s affiliation with MQM goes back to the 1988, when he was a student of SM Commerce College. When the army operation against the party started, Abidi – who had seen several tortured bodies of his colleagues – distanced himself from politics.

Although he went to the United States for his undergraduate degree in science and business management from Boston University, the candidate says that he was in touch with what was going on back home. “It was disturbing at time and I felt helpless.”

After coming back in 1998, he chose to be an entrepreneur – he was part of distributing Walls ice cream, and later joined the seafood processing business run by the family. Abidi’s father, Syed Ikhlaq Hussain Abidi, was also actively involved with the MQM and was an MNA from NA-250.

Abidi jumped back into active politics in 2008, and formed the Professionals Research and Advisory Council (PRAC) for MQM. “The idea was to gather professionals such as me who had started with the All Pakistan Mohajir Students Organisation but became disconnected due to careers and family life.” Abidi was then asked to form and head the social media team. He is now the vertical head of the social media strategy, and is currently affiliated with the cyber communications department of the party. “MQM’s social media team is the most disciplined, unlike the PTI’s trolls who are negatively active,” he chuckles.

Contesting against PPP’s Zulfiqar Qaimkhani, PTI’s Raja Azhar, and others, Abidi is confident that this seat belongs to him.

“The people of my constituency are my prized possession,” said Abidi, who once used to live in the Karachi Administration Employees Cooperative Housing Society within the constituency and has opened a branch of BOTS in the area as well.

If elected, Abidi’s focus will be to promote the local government system as he believes there can be no democracy without it.

The father of four, however, is well aware of the dangers which come with running for elections.

The start of his campaign coincided with the murder of Faisal, a joint in-charge of the Mehmoodabad sector. “Being a shia and a member of the MQM which is already threatened by the Taliban, I know that I face double the danger. I have two guards but I don’t carry a weapon myself.”

As threats hover, Abidi has decided to use social media for campaigning rather than rallies. “Even though social media doesn’t have a wide outreach, most opinion makers use them.”

The love of food or MQM?

Abidi’s loyalty for MQM surpasses his love for BOTS. “Even though I don’t have a feudal, tribal or industrial background, they have nominated. I did not even spend a single penny for nominations.”

Abidi’s passion for MQM is evident even in the landline number for BOTS which includes the digits 9090.