Offici­als say attack was carrie­d out by middle-aged woman.
By Our Correspondent
Published: April 21, 2013
Tweet Email 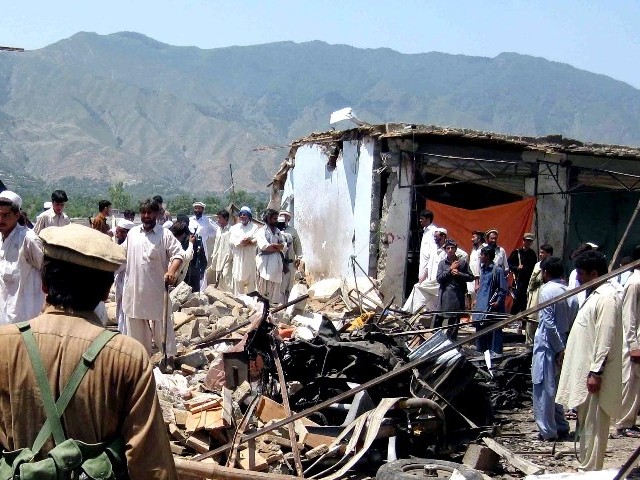 At least four people were killed and six others injured on Saturday when a female suicide bomber blew herself up outside a hospital in Khar, the main town of the Bajaur Agency.

Asad Sarwar, the assistant political agent for Khar, said the attacker, a woman between 40 and 50 years of age, attempted to enter the Khar district headquarters (DHQ) hospital. When she was stopped by a levies official at the main gate, she first threw a hand grenade through the gate and then detonated her explosive vest. The resulting explosion killed her, the official, a hospital worker and two others.

Bajaur Agency Political Agent Syed Abdul Jabbar Shah confirmed Sarwar’s account while talking to the media, adding that six others were injured in the attack. He identified the deceased levies official as Younas. The other three deceased in the attack were identified as Imtiaz Khan, Bakht Badshah and Anwarzada.

The political agent praised Younas for thwarting the woman’s attempt to enter the hospital premises, noting that the attack would have been much more devastating had she succeeded in gaining entry. He told journalists that the deceased levies official had been laid to rest with state honours.

According to Khar DHQ hospital medical superintendent Dr Riaz Khan, the six injured were being treated at his hospital and were now in a stable condition.

Security forces rushed to the site of the attack soon after the incident and cordoned it off. At the same time, the forces also launched a search operation in the area and beefed up security at all entry and exit routes from the agency. The suicide bomber’s body was taken into custody.

Khyber-Pakhtunkhwa Governor Engineer Shaukatullah strongly condemned the incident. In his statement following the attack, he expressed ‘deep shock and sorrow over the loss of precious lives’.  The governor directed the Bajaur Agency political agent to ensure the injured received the best available treatment facilities.

No group claimed responsibility for the incident till the filling this report. Political activists in Bajaur believe the incident may slow down the electioneering process in the agency.

Bajaur Agency is one of the seven agencies bordering Afghanistan’s Kunar province, which Pakistani officials claim is a hotbed for militant activity. Saturday’s incident was the first suicide bombing in the agency since last year’s attack which claimed 29 lives. Last month, two soldiers were killed in a remote-controlled blast in the agency’s Mamond tehsil.