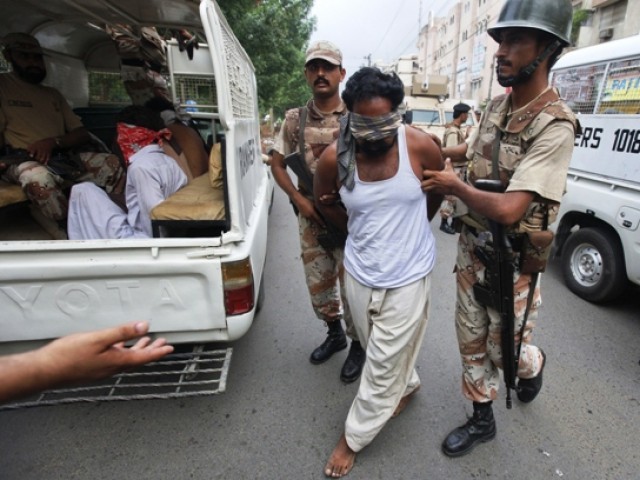 The judges were shocked at the provincial law enforcement agencies for failing to perform their duties. Hearing the Karachi law and order case, a five member bench – headed by Chief Justice Iftikhar Muhammad Chaudhry – was appalled after a Joint Investigation Team (JIT) report revealed that two arrested men, who had confessed to killing 162 people, were released on bail because their FIR only charged them for police encounter and carrying illegal weapons.

The bench was also surprise that the alleged target killers, identified as Munir Ahmed and Naeem Sheikh, were not prosecuted. It directed Sindh IGP Shahid Nadeem Baloch and Rangers DG Major General Rizwan Akhtar to immediately arrest the two.

“It is really appalling for us to learn that a man confesses to have killed 115 persons and another admits killing 47 persons, but they are only prosecuted for encountering with the police and carrying illegal weapons,” observed Justice Ejaz Afzal, who along with Justice Ijaz Ahmed Chaudhry, Justice Gulzar Ahmed and Justice Sheikh Azmat Saeed was hearing the case.”It seems that for the Sindh police, killing human beings is not a crime but carrying an illegal gun is,” remarked Justice Ijaz.

Stunned and silent, the Sindh IGP failed to respond to repeated questions by the bench as to why the police had not registered murder cases against the two suspects, who in their confession statements had revealed the names and location of the people they killed. Submitting the report, Ranger’s counsel Advocate Shahid Anwar Bajwa, asked the court to keep the contents of the report confidential. However, the bench had been alarmed that the two men were never booked for murder and no investigations were carried out even though the information was revealed to the JIT.

The bench further noted that the JIT report contained the names of another 71 men who had been arrested but a majority of them were booked under minor charges.

Directing the IG police to initiate action against those officers responsible for letting the men off the hook, the bench adjourned the hearing for Wednesday (today).

Earlier, the lawyer representing the Rangers told the court that if armed action was taken against Lyari criminals, who took shelter behind women and children, a Lal Masjid like situation could erupt.

However, the ire of the bench was drawn by the Karachi police, when the IGP reported that the results of the recent police operations to remove no-go areas would not be sustainable and criminals could return in the future. “You cannot have your cake and eat it too. You claim success against criminals in your report but cannot assure sustainability of your actions,” commented Justice Azmat Saeed.

Meanwhile, Advocate Shah Khawar told the bench that 106 SHOs of the police stations in Karachi had submitted their affidavits on the existence of no-go areas in their jurisdictions. As many as seven police stations – PIB Colony, Sachal, Soharab Goth, Kalakot, Chakiwara, Pirabad and Mangopir – had partial no-go areas, while other 99 police stations reported no such areas, he said.

Taking note of the report, the bench directed the Sindh police to remove the fearful influence of criminal elements and clear all no-go areas in the city.