The TTP threat and elections

The TTP threat and elections 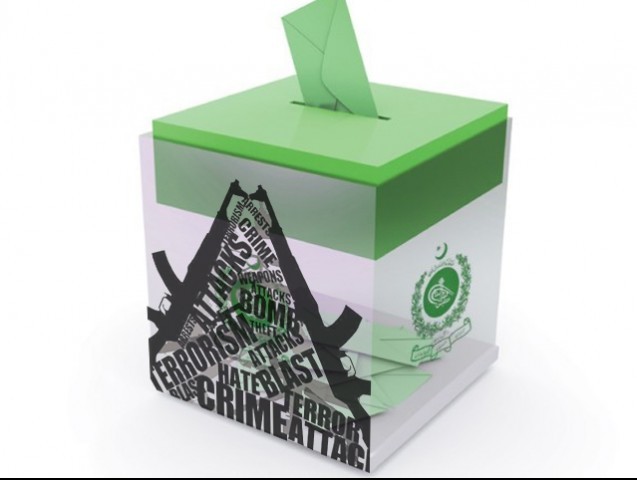 The TTP has threatened to strike at the ANP, the PPP and the MQM. PHOTO: FILE

We would all like to believe that the ballot is more powerful than the bullet, and that the pen is mightier than the sword. They are, but only in the long run. In the heat of battle, a pen is rather useless. Similarly, the positive effects of the ballot can be diminished, if not destroyed, by the use of the bullet. The Tehreek-e-Taliban Pakistan (TTP) understands this, just as they understand that in the long term, the greatest threat they face is from a sustained and pluralistic democracy. Military operations may roll back their physical gains, and efficient policing and prosecution — almost non-existent at this stage — may hamper their freedom of operation, but only an inclusive democracy can hope to drain the swamps that breed these monsters.

The mission before the TTP then, is a simple one: to try and prevent the elections from taking place. It is unlikely that this strategy will succeed, and therefore, their fallback plan is to try and disrupt the elections through violence and the threat of violence. In a clear bid to this end, the TTP has threatened to strike at the ANP, the PPP and the MQM. These parties have been singled out for being “secular” and have been warned that their election rallies and leaders will be targeted, with the caretaker prime minister noting that prominent leaders from these parties face significant threats to their lives.

These are no idle threats. The TTP and their terrorist allies have shown their ability to strike at even the most well-protected targets with ease and apparent impunity. The ANP, in particular, has been a target of their attacks for years now, in both Khyber-Pakhtunkhwa and Karachi. The MQM has also been in the crosshairs of the militants and has seen attacks on its party members, though on a far lesser scale than the carnage that has been unleashed on the ANP. Keeping in mind these threats, the ANP has announced that the party will generally try to avoid huge gatherings and instead carry out a door-to-door campaign. The PPP, meanwhile, has launched a constituency-based campaign. While the MQM has decided to continue its public meetings, the party has demanded foolproof security. Other parties, not directly threatened, are also being cautious in holding large rallies, expressing concerns over security.

In this backdrop, calls have been made for the Election Commission of Pakistan (ECP) and the Supreme Court to take note of the threats and ensure that the elections can take place in a safe and secure atmosphere. It is difficult to see how that will be possible or how these bodies can, in fact, ensure the protection of candidates and voters alike. In the last five years and even before, we have seen that the state is seemingly unable to protect itself, let alone ensure the safety of common citizens. Therefore, to expect the ECP and the SC to do so is unrealistic. At most, these bodies can push for a delay in elections until a safe atmosphere is ensured, but there is no way of telling how long that will take. In any case, a delay will be exactly what the terrorists want, and as we have seen, acceding to their demands simply emboldens them.

There are, however, some encouraging signs: the ANP has held an election rally in South Waziristan, defying the express threats of the TTP against holding public rallies — the TTP have said they will not otherwise stop people in the area from voting — and Badam Zari has become the first woman to stand for elections from Pakistan’s tribal areas. All these are indications that the pall of fear, though intimidating, cannot silence every single voice.

For the opponents of the PPP, the ANP and the MQM, there is also little cause for rejoicing. Sooner or later, the TTP will turn their guns on them as well, as they, too, are part of a system the terrorists deem unacceptable. The sooner these parties realise that we face a common enemy, the better. The alternative is only a choice between a swift death and a slow one.