Flag-hoisting ceremony: ‘Reopening honorary consulate in Karachi was my dream’

Flag-hoisting ceremony: ‘Reopening honorary consulate in Karachi was my dream’ 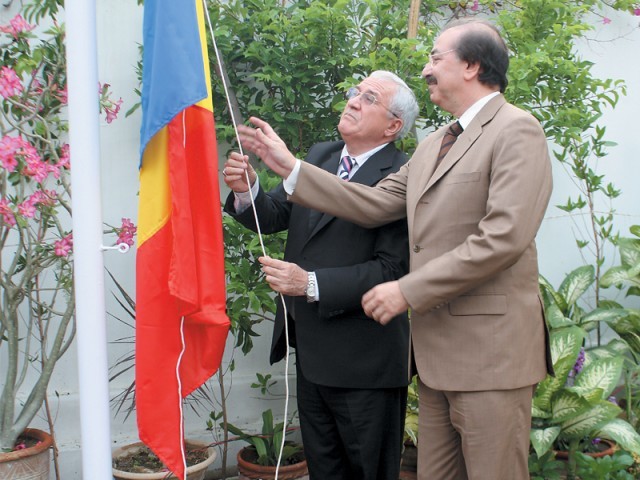 Romanian Ambassador Emilian Ion (left) and the new honorary consul of Romania, Tariq Saud (right), hoist the Romanian flag at the reopening of the consulate in Karachi on Monday. PHOTO: AMEER HAMZA/EXPRESS

Reopening the honorary consulate in Karachi was Romanian Ambassador Emilian Ion’s dream since he arrived in the country four years ago.

Speaking at a flag-raising ceremony at the residence of the new honorary consul, Tariq Saud, on Monday, Ion stressed the importance of Karachi as an industrial city. After congratulating Saud on his new position, Ion said he had complete faith in Saud that he would do his best to increase the bilateral relations between the two countries.

The consulate in Karachi would complement the activity of the Pak-Romania Business Council, an independent body launched on February 19, 2011.

“I want to extend my full support to Tariq and hope that he can act as a bridge for our two countries,” he said.

Director-general Dr Saeed Khan said that the bonds between Romania and Pakistan were very strong and based on mutual benefits. “Both countries are democratic nations and both of us are united in the fight against terrorism,” he said. “The ambassador has chosen the right man in the right city for the right job.”

Saud said he was honoured by his appointment and that he would do his best in his new role. A prominent businessman, Saud has also served as the chairperson of the All Textile Mills Association (Sindh).