The Sindh Home Depart­ment has given a three month extens­ion to the polici­ng powers of the Ranger­s Force in Karach­i.
Published: September 22, 2010
Tweet Email 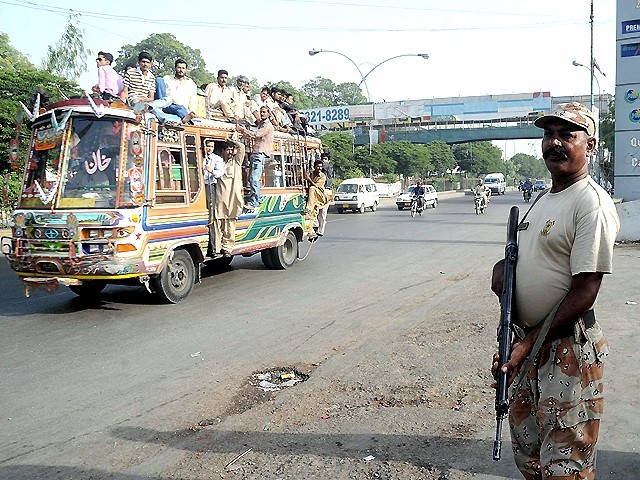 Security has been tightened in the city in the fresh wave of target killings. PHOTO: RASHID AJMERI

KARACHI: The Sindh Home Department has given another three month extension to the policing powers vested to the Rangers Force in Karachi.

The decision has been taken in view of the fresh wave of violence in Karachi. The Rangers Force was given special powers under section 5 of anti-terrorism act in the beginning of this year after police failed to control the situation in Karachi.

The last extension was due to expire today but now the rangers will continue to serve in the city till the December 19.

Meanwhile, four more people have been shot dead overnight in different areas of Karachi, bringing the death toll for the day to seven.

Police say one person was shot dead in Gulistan-e-Jauhar, one in Korangi, one in Orangi Town and one in Cantonment.

CID police have arrested a policeman named Ishtiaq for his alleged involvement in target killings. Weapons have also been recovered from him and Ishtiaq has confessed that he was involved.

The death toll in the recent wave of target killings has reached 22.

Security in Karachi has been beefed up while police and rangers continue searching for the perpetrators.