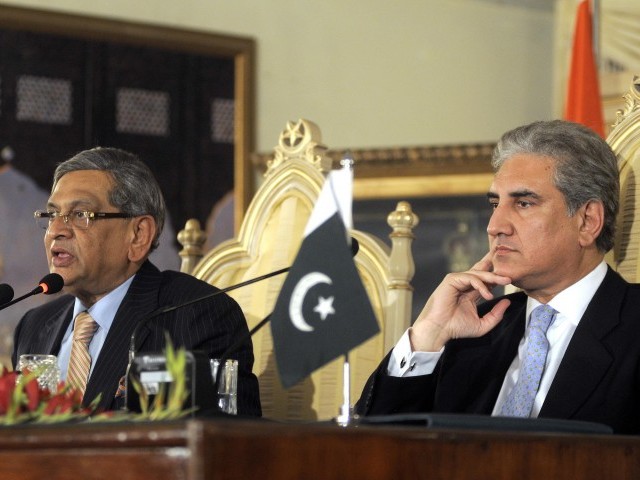 The foriegn ministers are likely to hold talks in New York later this month. PHOTO: EPA

ISLAMABAD: The foreign ministers of Pakistan and India are likely to hold talks later this month in New York on the sidelines of the UN General Assembly session, officials confirmed on Tuesday.

“We have received a request from India through its high commissioner in Islamabad, seeking a meeting between the two foreign ministers in New York,” a top Foreign Office official told The Express Tribune.

“We are considering the Indian request and a final decision will be taken in a day or two,” he added. Foreign ministers from both countries are currently in New York to attend the annual session of the UN General Assembly.

The expected meeting comes against a backdrop of renewed violence in Kashmir, which drew strong condemnation from Pakistan.

They last met in July this year in Islamabad where they failed to agree on a roadmap to revive the peace process that New Delhi had suspended following the Mumbai attacks in November 2008.

Pakistan held India responsible for the lack of progress in the talks, insisting New Delhi was not prepared to discuss all issues.

However on Tuesday, Indian Foreign Secretary Nirupama Rao said that her country was prepared to discuss all outstanding issues including Kashmir with Pakistan. She said that India wants to “persevere in our dialogue with Pakistan.”

“It is not about segmenting this dialogue or taking away complicated issues from it saying that we are not ready to discuss it,” she added.

Foreign Office Spokesperson Abdul Basit welcomed the Indian statement, saying Pakistan has always been willing for meaningful and result-oriented dialogue on all issues including Kashmir.