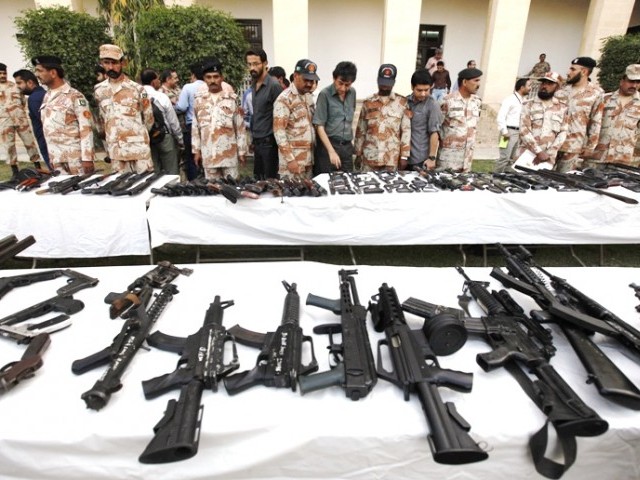 Pakistani Rangers and journalists stand beside a display of confiscated weapons during a media briefing. PHOTO: REUTERS/FILE

KARACHI: The Supreme Court (SC) rejected the report submitted by police on Thursday about no-go areas in Karachi, and ordered the chief secretary to ensure the elimination of all no-go areas within seven days and submit a report, Express News reported.

A five member bench headed by the chief justice of Pakistan (CJP) heard the Karachi unrest case in the SC registry Karachi.

Terming the police report irrelevant and misleading, the court stated that they had demanded the SHOs from the 112 police stations in the said areas to provide a clearance certificate but they failed to do so.

“Barriers do not determine no-go areas. We have a barrier outside this court so does this become a no-go area as well?” questioned the CJP.

The CJP then went on to give examples of, Kolkata, Delhi and Mumbai — cities with similar demographics as Karachi but with a lower crime rate.

“The areas where law enforcers face resistance can be called no-go areas,” he said. “But we have removed barriers from other places and made them ‘easy come easy go’ for citizens as well as law enforcers,” Nadeem said while addressing a press conference.

DIG West Zafar Abbas Bukhari, on March 29, admitted to the CJP that law enforcers fear setting their feet in some of the city’s troubled spots. The senior police official voiced fear during an apex court hearing linked to the Karachi violence case.

The court had then adjourned the case till April 4.

“What happened with Arshad Pappu could not have taken place without the consent of any high official,” the CJP remarked in reference to Arshad Pappu’s murder.

The police asked for more time to submit their detailed report regarding the murder and the court granted it.

Police recovered the bodies of gangster Arshad Pappu and his brother Arfat in the Lyari area of Karachi on March 16. They claimed that both the men were kidnapped and were tortured to death.

Pappu, as he is commonly known, was one of the key players in the Lyari gang wars.

Elections: My passion is to educate girls, says Badam Zari