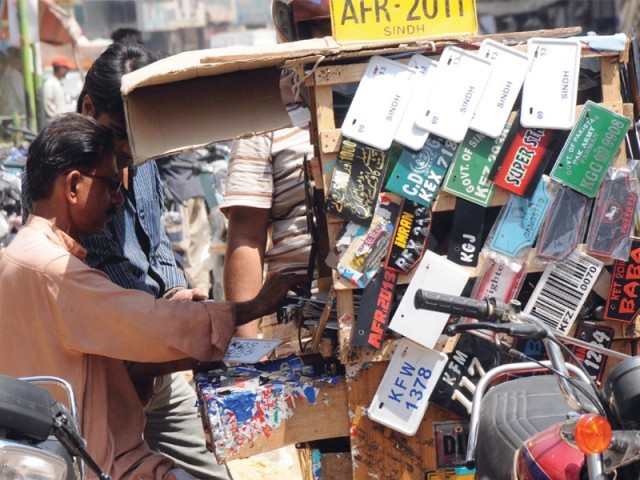 Nasir Javed has been in the business of making and selling plates for vehicles for the last 30 years. Since the orders by the police, he said that his business has doubled with people coming in to buy the standardised plates. PHOTO: RASHID AJMERI/EXPRESS

KARACHI: If you haven’t received a registered plate for your motorcycle from the excise and taxation department or you’ve chosen a more colourful and fancy one to add a personal touch to your vehicle, then you have only five days remaining to get the standardised plates as ordered by the Sindh police.

At a press conference on Tuesday, the Sindh police spokesperson, SSP Imran Shaukat, announced a seven-day deadline for the motorcycle owners to get a white registration plate with the numbers written in black. “The owners of those motorcycles which do not have the standardised registration plates, will be considered associates and supporters of the terrorists and will be charged under the Anti-terrorism Act.”

After the announcement, police have tightened their snap checking to make sure that people fix their registration plates.

A student of the Islamia College, 19-year-old Waqas, brought his motorcycle to Akbar Road in Saddar to change his fancy ‘crystal’ registration plate to the standardised white one.

“The police are creating trouble by stopping us at every check point. They ask for Rs50 or Rs100 just because of my personalised number.”

Waqas bought his motorcycle from a showroom in 2010. “At that time, the government was not providing the standard registration plates that are being used today. They started it for motorcycles registered in 2012,” explained Waqas.

Misbah Alam, 40, a worker with a private company, was also searching for someone who could sell him the registered plate for a cheap price. “I am a law abiding citizen and I do not want to be accused of terrorism.

Javed charges Rs150 for a white plate with blue or black writing on it, while the fancy plates range between Rs150 to Rs200.

Amir Shah, who also makes plate in the market, was equally happy with the orders because he has more work now. “The police will keep putting pressure for a week so that people come and buy standardised plates and afterwards, when they forget about the orders, people will remove those plates and use the fancy ones again,” said Shah.

ASI Rao Shahid told The Express Tribune that customised plates are easily removed or changed by criminals, making it hard for the police to trace them. “Police cannot easily find them unless the vehicle registration numbers are checked with the engine number. Once a person has the government standard plates, they can be easily traced from the model on the registration plate.”