Theatrical performance: Tribute to Manto and all he stood for

Theatrical performance: Tribute to Manto and all he stood for 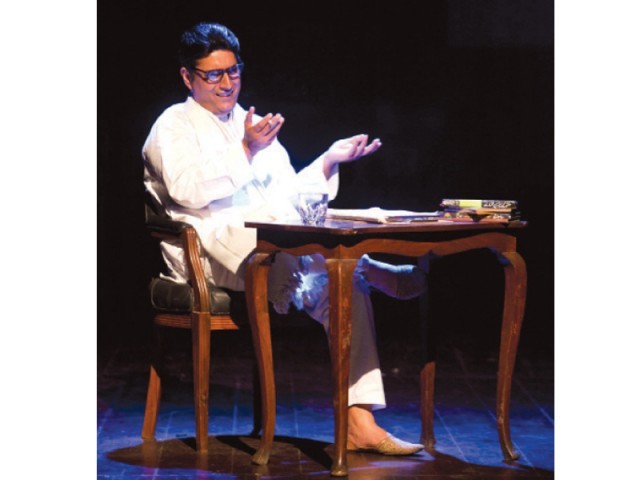 Ardent fans of short story writer Saadat Hasan Manto, took solace in a theatrical adaptation based on his works at the Pakistan National Council of the Arts (PNCA) on Wednesday.

Garbed in white kurta shalwar, Naseem Abbas portrayed Manto with ease. His dialogue delivery accentuated the demanding role. The thick-rimmed glasses were an unmistakable trademark of the writer.

The play opens with a dialogue between Manto and his friend and confidante Shayam, played by Kamran Mujahid of Bombay musical fame. Their conversation highlights Manto being targeted by authorities over his controversial writings.

Interlaced in their talk are the themes of many of Manto’s works, which include “Khuda Ki Kasam”, “Thanda Ghost”, “Khol Do”, “License”, “Chacha Sam ko Khar”, “Mooch unlimited”, “Pas Manzar” and “Toba Tek Singh”.

With well-timed dialogue delivery and a pinch of sarcasm, Abbas as Manto managed to evoke much laughter from the audience.

Manto’s struggle to highlight social suppression and women seemed to be press a raw nerve. On short intervals between the biography and narratives were scenes of a woman dressed in a black cloak. Here we meet an alterego of Manto, acted out by Uzma Hassan. The sequence is engaging, with a series of questions and answers, the two characters complement each other on stage.

Playwright Shahid Nadeem explained the play incorporated some of the fine selections of the writer and dramatised in that spirit. He focused on the objectification of women, dubbing Manto’s political statements and observations as a movement.

The audience were all praise for the performance. “I thoroughly enjoyed the play. It’s important to highlight those who have raised their voice against social issues often ignored as taboos,” Sara Ahmed, an audience member, said.

Ahmed Ishtiaque, another audience member, said, “Everyone acted well. I felt transported in that era, even though the issues still persist.”