More than half of the deaths took place in Punjab.
By News Desk / Creative: Faizan Dawood
Published: March 18, 2013
Tweet Email 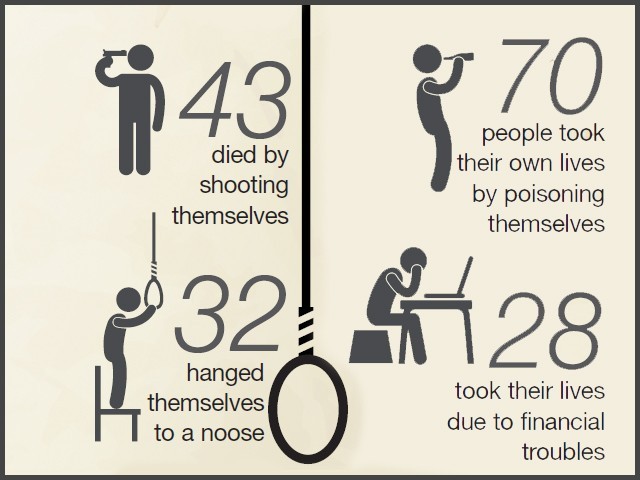 A whopping 174 people, including 45 women (26%) committed suicide across the country during the last month with more than half of them taking place in Punjab, according to a report.

The Human Rights Commission of Pakistan (HRCP) has stated in its recently-released report that out of these 174 suicides, 44% (76) took place due to some sort of family-related crisis while 28 people took their own lives in the face of financial troubles.

Various methods were used in these suicides including using poison, shooting oneself and hanging to death.

Poisoning one’s self to death was the most widespread method used across the country with almost 70 casualties — 40% of the total. Around 43 individuals (25%) took their lives by shooting themselves and another 32 hanged themselves to a noose.

According to the report’s area-wise data, the highest number of suicides was reported in the province of Punjab with 91 cases — 52% of all deaths. Sindh stood at number two with 30 reported cases — 17% of all suicides. The remaining deaths occurred in Balochistan and Khyber-Pakhtunkhwa —18 men, of whom 16 were unmarried. The age of majority of those who committed suicides lie between the age brackets of 16-35 years.

Meanwhile, 58 cases of attempted suicide were also reported where timely medical assistance proved to be the saviour. Among these, 21 were women — most of them married and a majority hailing from the south Punjab region.

As many as 36 people also lost their lives in the name of ‘Karo Kari’ or honour killings during the course of the past month, according to the HRCP report.

Among the victims, almost 40% (14) were killed by their husbands, three by their brothers and the rest by their relatives.

According to the monitoring report, 40 people were sexually assaulted last month.

Among these, a staggering 78% (31) included women victims, with the highest incidence rate in Punjab — 70% of all victims of sexual assault were from this province.

Most of their ages lie between the age brackets of 10-17 years.