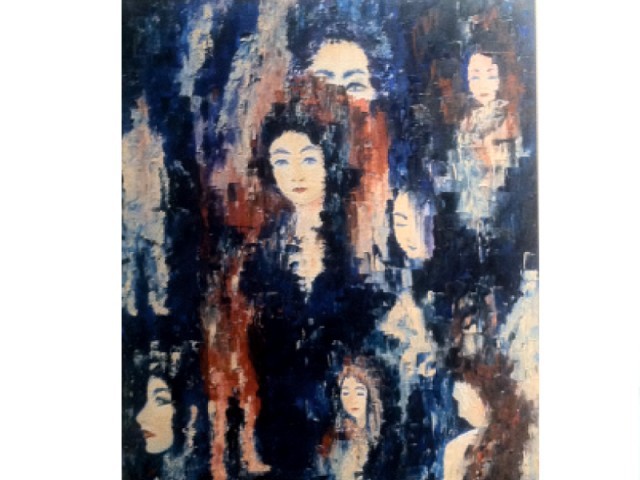 The art that was showcased was glaringly feminist and in-your-face. PHOTO: THE EXPRESS TRIBUNE

In connection with International Women’s Day, students and senior artists came together to depict art that was glaringly feminist and in-your-face at the Rawalpindi Arts Council on Friday.

Students from Foundation University displayed their theses titled “Death and soul” at the exhibition that was titled “Art for a Cause”.

Working on large canvases, the majority of the figures painted by the younger artists were female. “I think young artists prefer drawing women as it gives a more mysterious aura to the piece, the female is an enticing, enigmatic figure for artists,” explained Nida, an art student.

Some of the pieces conveyed a tinge of angst.

Three frames set together by Harris depict three major religions and their death rituals in miniature technique. Muslims mourn the death of a loved one, a grim reaper welcomes an evil soul in hell in Christianity, while the concept of reincarnation is depicted in Buddhism. “When I researched online for my thesis I found out about different beliefs about the soul’s journey after death,” said Harris.

I wanted to depict these different beliefs as simply as possible, he added.

I’ve covered as many aspects as possible, female infanticide, women facing barriers in their everyday struggle and honour killing are all apart of my work,” said Mirza. Many could be seen appreciating the reflection of emotions in each of her 10 pieces. As one visitor stated, “She has painted with anger and passion.”

The exhibition was inaugurated by Norwegian ambassador Cecilie Landsverk with human rights activist Tahira Abdullah. The event was organised by Corazon, a non-governmental organisation, and continues till March 11.