International Women’s Day: Craftswomen prove through their work that age is just a number

International Women’s Day: Craftswomen prove through their work that age is just a number 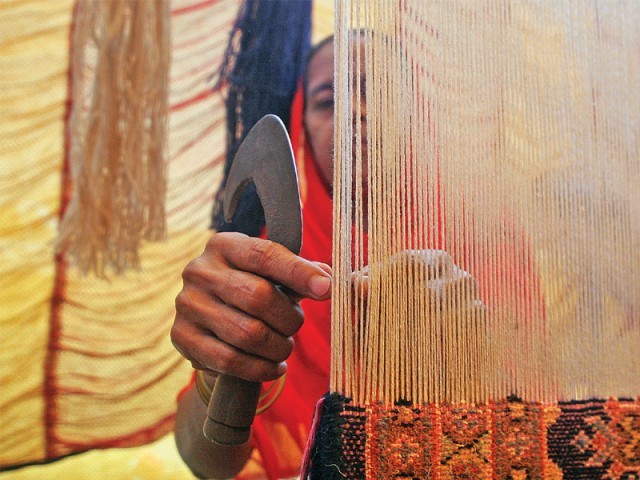 Around 20 women from Landhi set up stalls at the Karachi University on Thursday to display their handicrafts. PHOTO: ATHAR KHAN/ EXPRESS

KARACHI: Women of Landhi displayed their handicrafts skills in the lawn of Karachi University, as part of the celebrations of International Women’s Day, organised by the Centre of Excellence for Women’s Studies on Friday.

The event, which was based on the theme of issues and challenges faced by ageing and home-based female workers, highlighted the talent among such women as they demonstrated the process of making handicrafts.

Muttahida Qaumi Movement Deputy Convener Dr Farooq Sattar, who was the chief guest at the event, called for social, political and fiscal reforms to empower women in the country.

“We have to eliminate the feudal and inheritor system in politics as 98 per cent of Pakistanis are not exercising their right to cast votes because of it,” he said.

Criticising the social taboos which allow domestic violence to exist in the society, he said that the male members of the society have to play a positive part for their daughters and sisters and ensure their participation in society. He paid tribute to Malala Yousufzai and Arfa Kareem for their efforts and called them role models for the females of the country.

Nasreen Jalil, MQM leader and former Naib Nazim of Karachi, asked women to rely on themselves and not to depend on their brothers, fathers and other male members of their families for help.

“The true concept of women empowerment is to be self-dependent and to take good care of your health. Women have more courage than others which is why they are more important,” said Jalil.

The university’s vice-chancellor, Prof. Dr Muhammad Qaiser, admired the work of the aged women which was on display. “After looking at their work, I can say that their items could be exported easily. They work hard but don’t get what they deserve in return.”

Talking to The Express Tribune, the centre’s director Prof. Dr Nasreen Aslam Shah, said that three PhDs in her department are on aged home-based workers, for which 300 women in Landhi are being interviewed.

According to her, an NGO has given loans worth Rs10,000 for starting their own business and now these women are returning the loan every month. “Aged women are usually considered useless in the society and issues pertaining to children and middle-age women are rarely discussed but they deserve recognition in the society,” said Shah.

Jugnoo Salahuddin, an assistant professor at the Social Work Department, presented her research paper on ‘Impact of Emergencies Situation on Elderly Women’ for which she carried out a survey of elderly women in Jacobabad and Shikarpur who received financial assistance from a NGO during the rehabilitation of flood victims.

“Those women set up their own businesses and supported their families, raising their importance and role in their families and the society.”