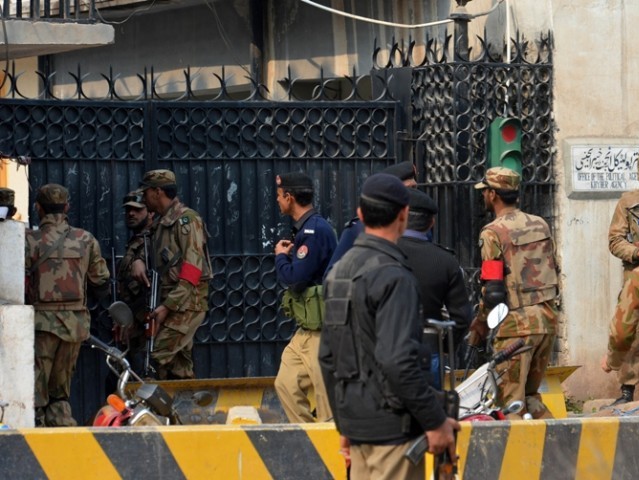 Pakistani army soldiers move at the office of the top political official of Khyber tribal region after the militants attack in Peshawar PHOTO: AFP

In yet another high-profile attack, two suicide bombers stormed the office of the political agent of Khyber Agency in the high security zone of Peshawar on Monday, killing five people and injuring over a dozen more.

Political Agent Mutahir Zeb was unhurt but his deputy, Assistant Political Agent Khalid Mumtaz Khundi, was wounded in the attack that was not immediately claimed by any militant group.

According to police, two bombers, dressed as Levies personnel, first opened fire at the gate of the PA office located on Bara Road in the garrison area, killing and injuring some guards. Then they entered the building and a gunfight erupted.

“One of the bombers blew himself up when hit by bullets. The other, however, managed to reach the control room, destroying the building and the adjacent office,” SSP Operation Imran Shaid told The Express Tribune.

Before detonating his bomb, one of the attackers tried to break into the part of the building where Additional Political Agent Attaur Rehman was presiding over a meeting of tribal politicians.

Jamil Shah, spokesman for the Lady Reading Hospital, said five people were killed and seven others admitted with serious injuries. Four security officials – Bakhatar, Barkat Dad, Hakimullah and Misri Khan – and an unidentified civilian were among the dead, he added.

APA Khundi was driven to the Combined Military Hospital (CMH) for the treatment of his wounds.

Office-bearers of all political parties in Khyber Agency were discussing preparations for the next general election when the complex reverberated with heavy gunfire, Shah Hussain Shinwari, the president of ANP’s Khyber Agency chapter, told The Express Tribune.

“The firing continued for 15 minutes, after which we heard two loud explosions,” said Shinwari. “Within 20 minutes, army troops reached the spot, cordoned off the complex and started searching for the attackers’ bodies.”

Muhammad Iqbal Afridi, the local leader of Pakistan Tehreek-e-Insaf, said the militants also hurled some grenades. “Security forces evacuated us from the building. While leaving, I saw two dead bodies and blood everywhere,” he told AFP.

“We have found two bodies in pieces. The bombers were about 20-years old and armed with automatic rifles as well as suicide vests,” said AIG Special Branch Sahfqat Malik who is also the head of the Bomb Disposal Squad. He added that the bombers were carrying up to eight kilos of explosives.

The meeting participants believe they were not the target. “It is easier for militants to target our public rallies than break into our offices. They were definitely looking for something else,” said one of the participants.

The complex contains the PA office, police cells to detain suspected militants, and residential quarters. And there were reports that attackers were trying to reach the detention cells where suspects are held.

It was the second high-profile terrorist attack in three days. On February 15, Khyber-Pakhtunkhwa Chief Minister Ameer Haider Khan Hoti escaped a suicide attack in his hometown of Mardan. The outlawed Tehreek-e-Taliban Pakistan claimed responsibility for the attack.

The group had also claimed the December 22 assassination of senior provincial minister Bashir Bilour in a suicide bombing at a political meeting in Peshawar.  (With additional input from Agencies)

In solidarity: Day of mourning for Quetta carnage