Gwadar Port handed over to China

Gwadar Port handed over to China 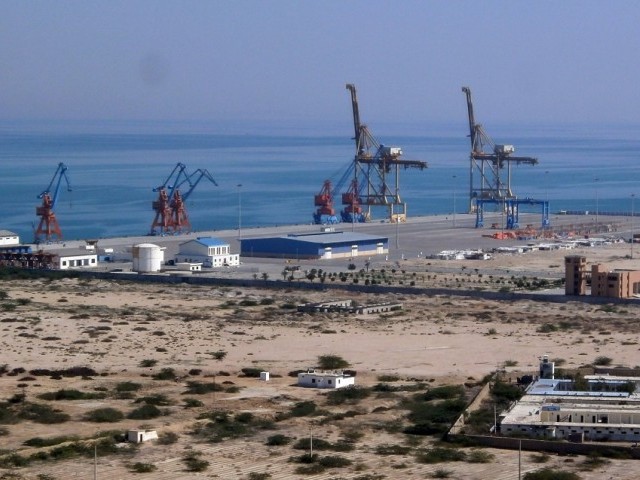 ISLAMABAD: China took control Monday of a strategic Pakistani port on the Arabian Sea, as part of a drive to secure energy and maritime routes that also gives it a potential naval base, sparking Indian concern.

The Pakistani cabinet approved the transfer of Gwadar, currently a commercial failure cut off from the national road network, from Singapore’s PSA International to the state-owned China company on January 30.

It had not been clear when the actual handover would take place, but Pakistani President Asif Ali Zardari presided over the signing of a memorandum of understanding on Monday that was broadcast live by local television.

“The contract of operation of Gwadar port is formally given to China. Today, the agreement is transferred from the Port of Singapore Authority to China Overseas Ports Holding Company Limited,” Zardari announced.

“The award of this contract opens new opportunities for our people… It gives new impetus to Pakistan-China relations.”

The Pakistanis pitched the deal as offering an energy and trade corridor that would connect China to the Arabian Sea and Strait of Hormuz, a gateway for a third of the world’s traded oil, overland through an expanded Karakoram Highway.

Experts say it would cut thousands of kilometres off the distance which oil and gas imports from Africa and the Middle East have to travel to reach China.

“Gwadar port will enhance trade and commerce not only between Pakistan and China but also in the region,” said Zardari.

China paid about 75 percent of the initial $250 million used to build the port but in 2007 PSA International won a 40-year operating lease.

Then-ruler Pervez Musharraf was reportedly unwilling to upset Washington by giving control of the port to the Chinese.

On February 6 Indian Defence Minister A.K. Antony said New Delhi was concerned by Pakistan’s decision to transfer management of the deep-sea port to China, which has interests in a string of other ports encircling India.

Pakistan foreign ministry spokesman Moazzam Ahmad Khan dismissed those concerns last week, telling reporters: “This is not something that any other country should have any reason to be concerned about.”

Gwadar is part of the southwestern province of Baluchistan, the most deprived part of Pakistan despite being rich in oil and gas deposits. The province is gripped by a separatist insurgency and record levels of sectarian violence.

On Saturday, a bomb killed 89 people in a Hazara Shiite Muslim neighbourhood of the provincial capital Quetta, barely a month after twin suicide bombers killed 92 people at a Hazara snooker hall elsewhere in the city.

Zardari said the building of infrastructure around the port will also promote economic activity in Gwadar and Baluchistan.

But some analysts warn that it may be some time before Pakistan can benefit from China’s takeover of Gwadar, stressing that the connecting roads and an expanded Karakoram Highway still need to be finished.

They also suggest that security concerns have made China more cautious about big investment projects in Pakistan.

In 2004, three Chinese engineers helping to build Gwadar were killed in a car bombing. The same year, two Chinese engineers working on a hydroelectric dam project in South Waziristan were kidnapped and one of them died.

Gwadar is the most westerly in a string of Chinese-funded ports in Nepal, Sri Lanka, Myanmar and potentially Bangladesh that encircle its big rival, India.

The ports were dubbed China’s “string of pearls” — or potential naval bases similar to those of the United States — but some analysts pour cold water on suggestions that Beijing is scouting for naval bases in the Indian Ocean.

Andrew Small, an expert on China-Pakistan relations, believes that most of Beijing’s concerns can be resolved through cooperation, but that Gwadar is the most likely port to be developed by China for naval use.

“Pakistan is probably the only government where the level of trust between the two militaries is high enough to make that a completely reliable prospect,” he told AFP recently.