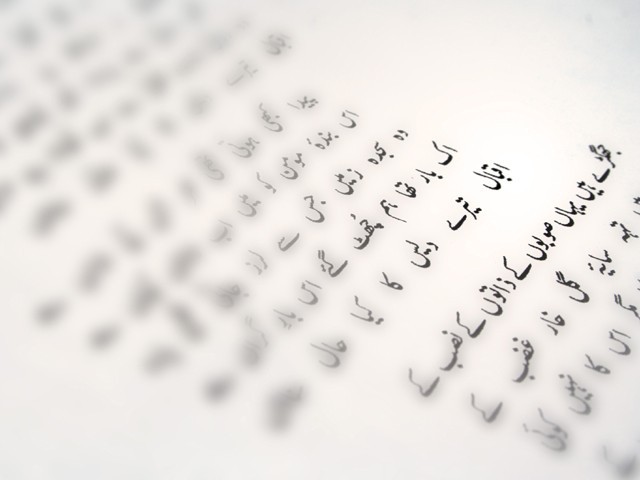 Scholar says irresponsible use of words, such as tsunami and drone attack, has butchered the Urdu language.

KARACHI: The irresponsible use of words, such as tsunami and drone attack, has not only crippled our political system but it has butchered the Urdu language as well.

Scholar Arfa Sayeda Zehra noted, in her own witty style, that social distortion of language leads to social chaos. The session on ‘Urdu ka sitam ya Urdu pe sitam’ [Injustice by Urdu or Injustice to Urdu], moderated by poet Fatema Hassan on the third day of the fourth Karachi Literature Festival, centred on the use and misuse of Urdu as a language.

“One politician comes up with the ‘glad tidings’ of tsunami while another associates ‘good news’ with his drone attack,” said Zehra. She asked the audience whether the zuban [language] or the khayal [notion] is at fault in, what she termed, the “glad tidings of destruction”. She explained that both the language and the notion are borrowed as the words from other languages stick to their original connotations. However, the politicians misuse them in Urdu rhetoric.

Urdu is treated the way we, as a nation, have dealt with the political sphere of our lives. A myriad of meaningless slogans and power devoid of command defines our politics, as well as, our treatment of Urdu.

When she was choosing the title of the session, Zehra stuck to the literal meanings of the word ‘sitam’ as it was used in Urdu prose and poetry. “Both the excessive emotional attachment and altogether negligence perpetuate a ‘sitam’,” she noted. “And this has been the case with Urdu for long.”

Clearly unhappy with a ringing cellphone in the audience, Zehra said, “If nothing has changed in the last 66 years, believe me no significant change will happen in the next half hour.”

The sensitivity that elevates a language to the status of faith does injustice with the very language. “We happen to elevate things to the limit, the crossing of which amounts to blasphemy.”

The other extreme, is the complete lack of ownership for the language which fails to appreciate Urdu as well as the heritage attached to it. “A certain section never tried to instil a close affinity with Urdu in them,” she said.

For both the excesses, either we attempt to exercise authority over Urdu, the way we do with women without giving an attempt to understand them, or we abandon it altogether.

For Pakistanis wanting to see Urdu as a self-dependent language, Zehra suggested we emerge as a self-dependent nation first. Culturally subdued nations cannot help incur influences and even then they remain inspired with awe. “If anybody speaks English or a word of it in the accent of our own, we take no qualms in terming them ‘Urdu-medium’,” she said. “Ironically, many among them are those who do not even know how to read Urdu.”

To Zehra, languages are the cultural reflection of nations as these are the medium to reflect their sophistication and priorities. Every living language goes, however, through a process of change and expands by adopting words from different languages. “Those languages that resist to change also resist to live on and die out eventually.”