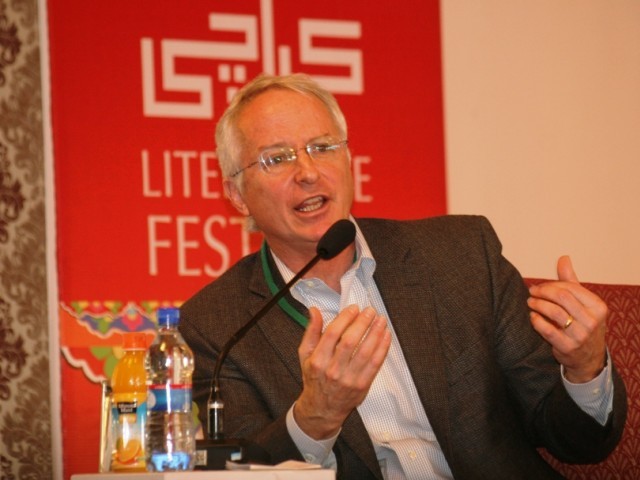 KARACHI: As the withdrawal of US troops from Afghanistan looms, Pakistanis on the other side of the Durand Line have grown more anxious about their fate. Will they be left in the lurch to deal with extremist backlash just like in 1989?

Experts agree that at least two things should be done before the withdrawal: Pakistan needs to end its dependence on foreign aid and the two countries should focus on establishing ties between their citizens rather than intelligence agencies.

These points came up as two former ambassadors were tasked with dissecting US-Pakistan relations on day three of the fourth Karachi Literary Festival. Former Pakistani ambassador to the United States and the United Kingdom, Dr Maleeha Lodhi, and former US ambassador to Pakistan, Cameron Munter, were the panellists at the discussion, moderated by Omayr Saiyid.

Lodhi began by giving a quick recap, saying that both countries had ample reason to be wary of each other. She criticised the US administration for its use of colourful adjectives such as “shotgun marriage” to describe the country’s relationship with Pakistan.

The attack by Nato forces on the Salala check post in Pakistan in November 2011, meanwhile, decidedly changed relations. Lodhi said that the relationship after withdrawal would depend on how the “endgame” worked for the superpower. But she reminded the US government that “we [Pakistan] are here to stay next to Afghanistan, and nothing can change that.”

Lodhi presented a list of ‘do’s and don’ts’. Going forward into 2014, she advised the governments to be realistic about their relationship. “Don’t pretend that there is a strategic bond when there isn’t one.” She advised the US administration to not “view Pakistan through the lens of Afghanistan”. She blamed the first Obama administration for failing to differentiate between the countries.

Munter agreed with most of Lodhi’s observations, saying many of her questions were also asked by American people.

Munter recognised that the US had viewed “Pakistan through the lens of counterterrorism” only, adding that the AF-PAK doctrine was an example of that misjudgment. However, Munter also spoke about various approaches taken by the US government which it felt would help improve its relations with Pakistan’s citizens.

Munter agreed with Lodhi as he said that throwing good money after bad at Pakistan did not yield positive results. He admitted that the US itself needed to reassess its engagement with Pakistan so that it could focus more on capacity building.

However, he also advised Pakistan’s political elite to recognise the challenges they faced, and encouraged them to learn to tackle them on their own. “Fixing the Kashmir issue is not something that we owe Pakistan.” Then to thunderous applause, he said, “If you want to be respected by others, you should learn to respect yourself.”

The first question posed to the panellists by an audience member was about drone attacks on Pakistani territory. “What if, 20 years from now, Russia, China and Israel also start using drones?” he asked. Munter responded that countries tackle with extremism with whatever tools they have.