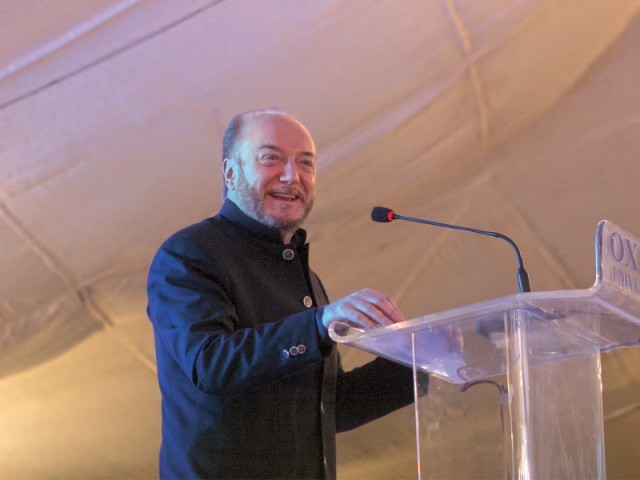 “Stop invading Muslims lands! How can you expect Muslims to love you when you are forcefully occupying their lands and murdering their people?”

This one statement was enough to prove why scores of people had gathered at Beach Luxury Hotel to hear the closing speech of the chief guest of the fourth Karachi Literature Festival, MP George Galloway Sunday.

He spoke from the heart with such passion that many were wiping tears from their eyes – even those who had stood at the far corners of the ground for lack of space to sit.

He made his disdain for Obama’s government obvious by quoting his foolish statement that the boys suddenly surrounding his daughters are like drones – in that you ‘don’t see them coming’.

“Well, yes you don’t see them coming, President until your wife is sitting without her head and your children are in pieces,” stated a clearly emotional Galloway.

The MP made it clear that drones are not the way to counter terrorism. “They only feed the swamp of hatred which is what 9/11 was — pure hatred for a country that has meted out injustice to Muslims.”

To end this hatred, the rulers of the world must do the opposite of what they are doing at present. And so he listed three points.

The first one, he stated, was addressed in part to a major soft drink company.

“Stop supporting the crimes of Israel against the Palestinians.”

Palestinians have no country, no papers; they are marginalized and oppressed. The Western support of Israel has undoubtedly led hatred to grow among Muslims. “The double standards and hypocrisy of the West,” he spat.

Iran is being openly threatened with war when it doesn’t have any nuclear weapons while Israel possesses loads of them and goes unpunished – how is that for double standards? As long as Western countries are giving Israel money for weapons, inventing one law for Israel and another for others, how can you expect Muslims to look with equanimity towards a crime of such importance in such a place?

Coming to his second point, Galloway stated that the West must stop invading and occupying Muslim countries.

“How can you expect Muslims to love you when you are occupying Muslim countries in the name of democracy? Occupation of Muslim lands can only feed the fanatics and fill this swamp of hatred. This has to stop.”

Finally, he stated that the West must stop propping up the dictators who rule the Muslim worlds.

“Muslims are not stupid – they know that you arm them, finance them and support them. You give them political and diplomatic support in order to stay in power. We help the tyrants stay in power – the people know this.”

The crowd was won over – nothing else needed to be said.

Galloway stated that although he has visited Karachi after 25 years – mainly due to political reasons – he would want his next visit to be much sooner.

“Believe me, I could stay here for the rest of my life – if you promise to gather every day to listen to me – believe me I would never leave,” said the MP, to a crowd that was now a fan for life.