Table talk: A treat from Afghanistan

Table talk: A treat from Afghanistan 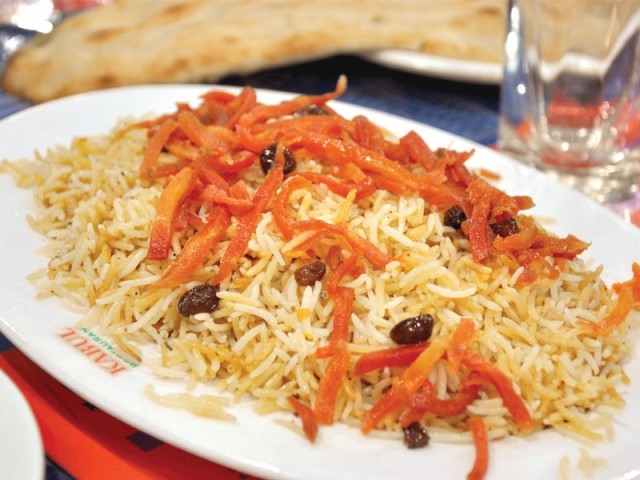 When the Afghans started to migrate to Pakistan in the wake of the Soviet invasion in their country, they brought with them what is still celebrated in the F-7 neighbourhood of Islamabad — great food. Kabul Restaurant, which opened in 1989, still manages to draw in food lovers even though the capital has now a wide variety of cuisines to offer.

Although a few more restaurants, including Khiva in F-6 and Hujra in F-7 opened up in the city, Kabul Restaurant had created its niche well before them. People who go to this restaurant don’t care about its no-nonsense simplicity as the food remains the highlight of the place. Located on College Road, the restaurant, which is usually bustling with people during lunch and dinner hours, guarantees to serve your food on time as their grill is always on.

The number of items offered on the single-page menu at Kabul Restaurant might be limited , but the quality of food is extremely high. It’s a meat-lover’s heaven, you will mostly find beef and lamb dishes, while white meat does not feature prominently on the menu. I rarely eat red meat but the food is so delicious that I devour it without giving it a second thought.

One thing I love about Afghan cuisine is that it is incredibly flavourful without being too spicy. It is quite difficult to stop eating the salty Afghani tikkas, cubes of beef fat skewered alternately and cooked to perfection.

The Kabuli pulao is a complete meal in itself — a rice dish served with a portion of beef and topped with carrots and raisins. However, it can be eaten along with Afghani kofta (meatball) in a lentil curry. If I had to possibly pick one dish out of all, it is the Special Afghan Manto — dumplings stuffed with minced meat and topped with lentils and a thick yogurt-sour cream mixture.

The eatery does not only offer flavoursome Afghani food, but is also easy on your wallet, with an average price of Rs300 to Rs500 per person.

Sahar Habib works as a content writer and researcher at a communication design company and manages a blog at www.chaipluscake.com in her spare time.